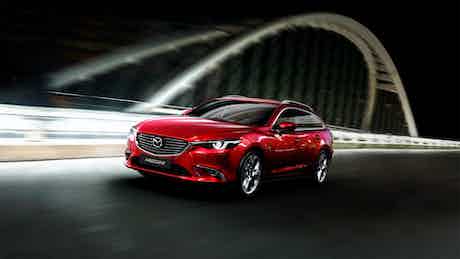 Okay, fair enough. The external changes don’t add up to much – just wheels, lights and a new grille treatment – but if it ain’t broke, why fix it? The 6’s interior is where the broader strokes have occurred. The actual design has changed very little except for a new extended leather section and, most notably, the upper dash.

When we reviewed the Mazda 6 Tourer in November, about the only thing we could put in the negatives column was that the satnav screen was a little on the small side. The new model addresses this with a seven-inch touchscreen taken from the smaller Mazda 3 hatchback – it’s moved slighter closer to the driver too.

With the dashboard no longer needing to be tall to house the satnav unit, Mazda has lowered it somewhat, freeing up room for a head-up display (Sport Nav models only), also from the Mazda 3.

All models now get DAB radio and, depending on your trim, you can have keyless entry, a start/stop button and an electronic handbrake too.

The Mazda 6 engine range hasn’t changed, so there’s still the choice of 143hp or 163hp 2.0 petrols or 148hp and 173hp diesels. All but the lowest powered petrol come with Mazda’s iELOOP regenerative braking technology, while only the 163hp petrol does without an optional automatic gearbox.

The diesels offer the best mix of performance and economy, but even the slowest petrol glued to an automatic gearbox won’t take longer than 10.5s to hit 60mph, while the same model is also the thirstiest, rated at 48mpg combined…

Mazda’s refreshed the safety pack too. The main beam headlights which already track with your steering now come with an adaptive function to automatically switch between main and dipped beams. Lane Assist now adds a Driver Alert system that detects deviation from your normal driving behaviour to rouse you from drowsiness. The blind spot monitoring system brings rear cross-traffic alert to let you know about hazards you haven’t seen when reversing out of spaces or off your driveway.

As before, you can buy the car in SE and SE-L trims, or upgrade to SE Nav and SE-L Nav for £700, which includes the satellite navigation system. The automatic gearbox is a £1,300 option, while the Tourer will set you back £800 more than the Saloon, except on lower specification petrol models.

The Mazda’s chief rival is the Ford Mondeo. The company used to be majority owned by Ford and all of its models were based on Ford platforms, so the 6 really needs to give the Mondeo a black eye in terms of abilities.

After that, it’s any other D-segment saloon and estate car combo – and there’s a lot of them. There’s the Vauxhall Insignia, Volkswagen Passat, Peugeot 508, Hyundai i40 and, at the top of the price range, the 6 may even be nabbing one or two sales from the BMW 3 Series and Audi A4.

A tech-led fettle for one of the sector’s best offerings makes it even better value.