2017 Frankfurt Motor Show guide – what cars will be there? 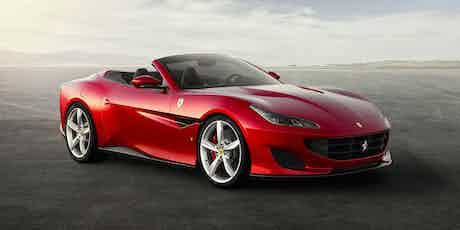 This year’s Frankfurt Motor Show starts on Thursday 14th September and runs until Sunday 24th September. The small crossover segment will have not one, but four new entries from Hyundai, Kia, SEAT and Citroen. There’ll also be a brace of new hot hatches, many SUVs, a lovely new Ferrari and Mercedes’ long-awaited F1-derived hypercar.

There’ll be a sporty RS4 version of the current Audi A4 Avant estate revealed – producing 450hp from a 2.9-litre twin-turbo V6 and covering 0-62mph in around four seconds. Audi will also reveal the new RS5 Sportback which will use the same engine. Both models will feature all-wheel drive.

The luxurious Audi A8 saloon replacement will be shown at Frankfurt, having already been shown in Spider-Man teasers and at July’s Audi Summit. It features self-driving technology and foot massagers built into the front seats, and it’ll also be the first car to use Audi’s new badging system…

The styling changes might be modest, but the Bentley Continental replacement was already so good, it only needed minor enhancements. It’s a little wider than before but still features a thumping 6.0-litre turbo W12 and a marginally more affordable 4.0-litre turbo V8. A hybrid version could follow later in its life.

Performance car fans will be happy to see the latest BMW M5 – an icon of the sector. Power is increased to 592hp while it gets a new all-wheel-drive system that can selectively engage or disengage the front axle for more grip or big smokey powerslides.

The BMW i3 has received a minor facelift for 2018 with the addition of a new, sportier i3s version. It’ll go from 0-62mph in a very respectable 6.9 seconds and will have a real-world range of around 125-150 miles – a small improvement over the pre-facelift model.

The 5 Series GT is dead. Sort of. The new BMW 6 Series GT offers a bulkier body than its non-GT namesakes – meaning more interior space and enhanced cargo room. It’s lost some of the dumpy styling of its predecessor and still promises the same great BMW driving experience.

Another model expected from the Bavarian manufacturer’s stables is the new BMW X2 SUV – a coupe version of the X1. While it’ll offer less practicality than the X1, it has more eye-catching styling that buyers in this segment will be looking for.

The BMW X7 is the brand’s rival to the Mercedes GLS. Its grille is one of the largest we’ve ever seen and the car will dwarf most other vehicles on the road. If other recent BMW concepts are anything to go by, the production model’s styling will be very similar to this concept’s when it reaches dealerships in 2020.

Chery is an established Chinese brand and Frankfurt will be its first meaningful attempt at launching a car in Europe. It’ll probably reveal a hybrid or electric SUV – thought to be called the Tiggo. Rumours of a follow-up model called Winnie the Pooh are currently unconfirmed…

One of the Nissan Juke’s latest rivals, the Citroen C3 Aircross will be revealed this month and is expected to undercut the Juke by nearly £1,000. It’s based on the C3 hatchback and will go on sale in the UK in November.

Good news if you like rugged 4x4s but don’t want to pay too much for the pleasure – the new Dacia Duster is here with slightly sleeker looks and a more refined interior. Prices won’t rise too much because Dacia won’t want to lose the crown of the UK’s cheapest 4×4.

Guaranteed to be one of the stars of Frankfurt is Ferrari’s new California replacement. It’s already broken cover but, with stunning looks and that prancing horse badge, lots of people will be queueing to see it in the metal.

The new Honda CR-V has been on sale in the US for a little while and will soon arrive in the UK. There’ll be a hybrid version to rival the Mitsubishi Outlander PHEV but little to excite hardened petrolheads.

Korea’s first serious attempt at a hot hatch packs 271hp and great handling. The Hyundai i30N won’t be the fastest around the Nurburgring, instead focussing on providing a sweet real-world driving experience.

Another motor show, another small crossover to rival the Nissan Juke. The Hyundai Kona has enough rugged styling to pass as a chunky off-roader but will it be a popular choice in a market already saturated with supermini SUVs?

Jaguar’s E-Pace compact SUV isn’t actually that small, but borrows some of its styling from the F-Pace. Based on the success of the larger model, we expect the E-Pace to prove to be a success story for the British manufacturer.

Kia is keeping its cards close to its chest with its new Shooting Brake concept. Its sleek lines wouldn’t look out of place on a Mercedes and could replace the punctuation-happy Pro_Cee’d in the Cee’d lineup. Alternatively, it could surface as an estate version of the Stinger GT.

Despite a strange name, the Kia Stonic is shaping up to be another decent small crossover to rival the Nissan Juke. It looks less out there than the Kona it shares a platform with, but Kia’s seven-year warranty could make this one of the most popular mini SUVs on sale.

Better fuel economy, better to drive and a more spacious interior. The updated – we can’t really call it new – G-Class will be at Frankfurt, but the boxy exterior will stay. After 37 years, you didn’t expect the styling to change, did you?

Details are scarce about Mercedes’ upcoming EQ hatchback concept but, like the VW I.D. concept, it’ll be fully electric and will have self-driving capability.

After the S-Class saloon was facelifted earlier this year, the coupe and convertible variants will get a nip and tuck too. Changes shouldn’t be too obvious because the S-Class is one of the most luxurious cars on sale and has continued to outsell its rivals.

Mercedes is ready to take a swipe at the Porsche Panamera with its four-door version of the AMG GT sports car. It’ll be sleek and will bear a clear resemblance to the two-door car with new headlights and the huge ‘Panamerica’ grille.

Mercedes will wake a beast at its home motor show. Its currently-unnamed hypercar will be unlike pretty much anything we’ve ever seen and will lock horns with the equally incredible Aston Martin Valkyrie. Thought the LaFerrari was quick? You haven’t seen anything yet…

A posh pickup? Well, sort of. Mercedes’ first ute will have lots of nice trim bits but underneath it’s based heavily on a Nissan Navara – a great load-lugger but its age is starting to show in the driving experience.

This Mini electric hatchback is only a concept and will lose some of its concept fripperies. We’d like to see the three-pin-plug wheels and the Zippy-ish face remain. It’ll probably look more like a conventional Mini hatch and could have a range of over 150 miles.

The new-generation Cayenne SUV has been revealed already so we know that it’s not a huge departure from the current model. It’s now Porsche’s most successful car to date, explaining why the refresh is a tad conservative.

Will this be a proper rival to the likes of the Honda Civic Type R and VW Golf R? Initial signs look promising after the Megane’s recent reveal. A nice, round 300hp is expected to be on tap and four-wheel steering should make it agile at low speeds and stable at high speeds.

SEAT’s second SUV will be smaller and based on the Ibiza. Sharp styling, VW Group build quality and a good driving experience could make the Arona a popular choice in the crowded small SUV segment, despite strong competition from the Nissan Juke, Renault Captur and countless others.

A limited edition hot Leon Cupra R will be at Frankfurt too. Only 799 will be produced and the new Leon flagship will have 306hp, matte paint with copper-coloured trim and upgraded performance parts.

If any car symbolises what designers think young people want in a car, the Smart Vision EQ concept is surely it. It’ll have next-level connectivity – we presume that means displaying your text messages during your journey – as well as self-driving capability and electric power.

Skoda’s replacement for the Yeti SUV is the Karoq, with styling similar to the larger Kodiaq that’s proved popular in the months it’s been on sale. It’ll share a lot of parts with the SEAT Ateca and VW Tiguan, and will go on sale later this year.

We’ll also see the Skoda Concept E at the show. It’s the brand’s first attempt at an electric car, promising a 310-mile range and charging up to 80% in just half an hour. The coupe body could make it onto a production model.

Thought the new Suzuki Swift needed an exciting range-topper? So did Suzuki. The new Fiesta ST-bothering Swift Sport will be more powerful and more exciting than the previous car, although some critics think it should look sportier.

The Insignia VXR is dead, although you might not have noticed. The new-generation Insignia brings back the GSi nameplate for the fast range-topper, which’ll have 257hp under the bonnet. A GSi version of the Sports Tourer estate should also be on the way.

Vauxhall hasn’t had an SUV in its lineup since the wheezy Antara was dropped in 2015, and the SUV game has stepped up since then. The Grandland X will count the VW Tiguan, Nissan Qashqai and SEAT Ateca among its many rivals. It’ll be available with a hefty tech bundle and should cost from £19,000.

The sixth-generation Polo is now bigger than many early Golfs and good enough to consider whether you’d need a current Golf. A 197hp Polo GTI will be unveiled, too.

We’ve already seen VW’s Polo-based SUV, the T-Roc, but it’ll be shown in the metal at Frankfurt. It’ll take on the Audi Q2 for VW Group supremacy, featuring a similar selection of engines including a 1.0-litre petrol and a 1.6-litre diesel.

The latest iteration of VW’s upcoming I.D. brand will be the Crozz, an all-electric SUV coupe concept. It could be revealed alongside a couple of other I.D. models.