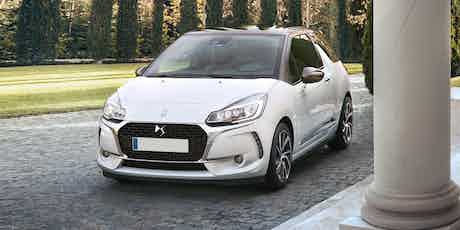 The original Citroen DS3 was released in 2010 in response to the successful of chic, retro cars including the Mini Hatchback and the Fiat 500. Unlike those models, however, the Citroen was decidedly modern in its styling approach unlike its rivals’ conspicuously vintage looks.

The French brand has now revealed the extensively updated DS3 and DS3 Cabriolet. It uses the same platform as the outgoing car but adds newer, more efficient engines, refreshed styling and an improved infotainment system. It’s also dropped the ‘Citroen’ name and badging as the firm seeks to distance its more mundane models from the upmarket DS range.

Citroen dealers will be selling the last of the outgoing models before the new model arrives in February 2016. There might be some great savings to be had on those models so put the Citroen DS3 or DS3 Cabriolet in our car configurator to see the deals carwow could help you get.

From the outside, the new DS3’s overall profile will be instantly familiar to owners of the outgoing model. Popular details including the ‘floating’ roof and shark fin B-pillars remain unchanged. So too are the LED/xenon combination headlights that, with the 3D-effect brake lights, give it a distinctive signature, even at night.

The most obvious changes are at the front where a new gaping grille houses the DS badge and is flanked by chrome ‘wings’. These wings were first previewed by the new DS5’s styling and extend to beneath the new DS3’s headlights and between the fog lights. It brings the car into line with the rest of the DS range but we can’t help but feel it looks a bit fussy.

Like the outgoing model, personalisation will remain an important part of the DS3 experience. The brand claims a total of 78 combinations of roof and body colours are offered along with 10 different roof decals and four different colours for the Cabriolet’s fabric roof. Spec wisely and you won’t see another DS3 like yours.

Fewer changes grace the new car’s interior compared to the outside but this is no bad thing – the DS3’s cabin was always one of its strongest points. The overall dashboard layout is mostly unchanged compared to the old model but the firm claims it’s replaced up to 20 buttons with a new touchscreen infotainment system.

As before, high end models will get seriously luxurious options, including the watch strap leather seats that really must be sat in to be appreciated. That leather is the Nappa variety – the same used in premium German executive cars – so it feels every bit as plush as it looks.

Seven engines will be offered on the new DS3 – five petrol and two diesel. The new award-winning PureTech three-cylinder turbocharged petrol units are the headline additions. The 128hp version is mated to a six-speed manual gearbox and will offer decent performance with respectable 62.8mpg average fuel economy and emitting 105g/km of CO2.

Auto fans are offered the same engine in 108hp guise mated to the company’s EAT6 automatic gearbox. This traditional torque converter type unit allows for significantly smoother shifts than the previous automated-manual which was derided for its lack of refinement and usability. With the new ‘box, this engine returns an admirable 61.4mpg and emits 105g/km of CO2.

Diesel fans get an updated version of the same 1.6-litre BlueHDi – expected to be offered in 99 and 118hp guises. The former can emit as little as 87g/km of CO2 making for a very eco-friendly supermini. Like all small cars with diesel engines, the extra purchase cost over a petrol means it only makes sense to drivers who cover very high milages. City drivers should invariably pick the petrol option instead.

Hot hatch fans could get the old DS3 with a high performance engine – known as the DS3 Racing – but this was only offered in extremely limited numbers. The UK is both one of the biggest hot hatch markets, and the DS3’s biggest overall market so the company has sensibly offered a proper production hot hatch this time – called the DS3 Performance.

The 1.6-litre turbocharged four-cylinder is an upgraded version of the old DS3’s unit and puts out 208hp – plenty for a car as small as the DS3. The six-speed manual gearbox gets shorter ratios to improve acceleration and a Torsen limited-slip differential is fitted as standard to improve traction. Despite its performance billing, it emits just 125g/km of CO2.

One of the most obvious additions to the new model is the touchscreen infotainment system that replaces up to 20 buttons that cluttered the old car’s dash. While we always prefer a rotary dial to a touchscreen, the new layout should simplify the car’s operation. Apple CarPlay and Mirrorlink for Android phones features and enables better smartphone integration.

Users can download a ‘MyDS’ app that, once connected, allows them to check their servicing schedule, monitor their fuel consumption and even remind them where they parked their car. Later in 2016, DS Connect Box will be added and brings automated emergency calls, servicing monitoring, geofencing and an in-built anti-theft tracker.

To keep you safe on the road, automated emergency braking now features and makes use of a windscreen-mounted sensor. Hill-start assist for manual models, front and rear parking sensors, and a reversing camera are also all offered to make driving that little bit easier.

Citroen has officially revealed pricing for the new model and, as expected, they’ve gone up marginally compared to the old model. The basic Chic model with the PureTech 82 engine now costs £13,995 compared to the £12,865 entry-level price of the old model. Citroen claims enhanced standard equipment makes up for the increased price.

Order books are now open with deliveries expected from February. Citroen is rushing to get the car on sale in the UK because it’s the largest market for this model – even France doesn’t buy as many DS3s.

Save money on your new Citroen DS3

If you simply can’t wait for the new version, put the outgoing Citroen DS3 or DS3 Cabriolet in our car configurator to see the deals offered through carwow. For more options, head over to our car chooser to narrow down your search.