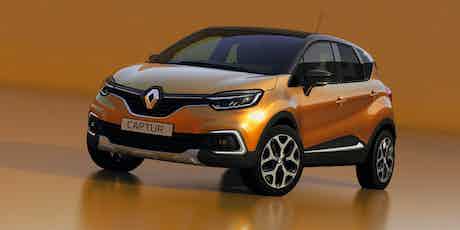 Renault’s facelifted Nissan Juke rival, the Captur, has been revealed before it appears at the 2017 Geneva Motor Show in March. This compact family crossover will benefit from a few discrete nips and tucks when it goes on sale before 2018.

Its headlights have also been modified and now boast LED technology to make them both brighter and more efficient. At the rear, the changes are more subtle – besides a large silver plastic insert on the bumper, little has changed.

A panoramic glass roof will be offered on top-spec models alongside a pair of new paint options – Desert Orange and Ocean Blue. Renault hasn’t announced what equipment will be fitted to its refreshed crossover but it has confirmed seven interior styling packs will be available.

Renault isn’t expected to alter the Captur’s engines for this new car – two turbo petrol units in 0.9 and 1.2-litre capacities and a pair of 1.5-litre diesels should be available.

The Captur is priced from £15,355 for the entry-level Expression+ model. The all-new top-of-the-range Signature S Nav model is priced from £21,405. Orders are open as of May, with deliveries starting July 2017.