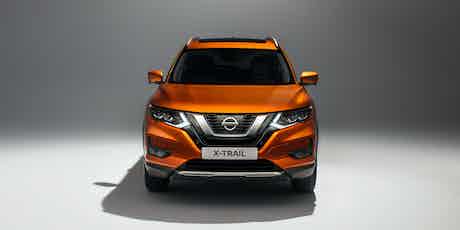 Nissan has revealed the facelifted X-Trail seven-seat SUV. It gets a handful of exterior touchups and new semi-autonomous driving tech

Updates to the Nissan X-Trail seven-seat SUV have been announced. On top of a revised exterior, Nissan has improved some of the interior trim and added clever semi-autonomous driving tech. Read on to see if the updates are enough to steer you away from its rivals, the Skoda Kodiaq and the Kia Sorento.

While the X-Trail’s overall shape is mostly unchanged, the front has been updated in a similar manner to the recently facelifted Qashqai. A larger grill houses a more prominent chromed V-shaped detail while revised headlights with sharper LED light signatures sit either side. The old circular fog lights have been ditched in favour of a more angular set, too, helping the front look decidedly more modern.

The rear now features full-LED brakelights and some extra chrome detailing to make it look more upmarket. The side view is enhanced by new alloy wheel designs while top-spec Tekna models get some more chromed trim on the undersides of the doors.

The most obvious addition to the new cabin is the redesigned steering wheel. This flat-bottomed design makes it easier to get in and out of the car according to Nissan, while its four-way thumb controllers claim to reduce the amount of time needed to take your eyes of the road to operate. DAB digital radio is now standard while audio fans will enjoy the eight-speaker BOSE upgraded stereo included on Tekna models – complemented by a more modern shark-fin antenna across all versions.

Fancier gloss black finish is used in certain spots while range-topping Tekna models have the option of two-tone leather interior. Heated seats are now offered for both front and rear passengers. Thanks to changes in interior design, the boot has grown on five seat models from 550 to 565 litres – you have access to up to 1,996 litres of cargo room with all rear seats folded.

Nissan has left much of the mechanical parts unchanged but has introduced some clever tech to support them. Most notable is the new ProPILOT semi-autonomous driving feature – due in 2018 – that can accelerate, brake and steer the car by itself within a single lane in slow traffic or at fast motorway cruises. This joins new automatic emergency braking with pedestrian detection and rear cross traffic monitoring to alert you if you’re about to back into unseen traffic.

The three-engine range is unchanged. Diesel buyers can pick from a 130hp 1.6-litre or a 177hp 2.0-litre diesel with the former offering more efficiency and the latter a little more torque making it better at towing – four-wheel drive or a CVT automatic gearbox are available on both engines. Petrol fans get a single 1.6-litre turbo unit with 163hp, front-wheel drive and a manual gearbox – it’s a more refined than the diesels at the expense of a little fuel economy.

There’s been no word yet from Nissan on what the changes will do to the X-Trail’s pricing but it’s unlikely to change vastly from the current model’s £22,885 entry-level cost. It goes on sale in August 2017 with ProPILOT semi-autonomous driving available at some point in 2018.