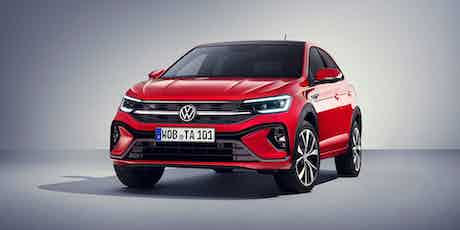 The Volkswagen Taigo is an all-new SUV-coupe alternative to the VW Polo and T-Roc that’s on sale now, priced from £21,960.

The new Volkswagen Taigo compact SUV is on sale now, priced from £21,960. That’ll net you a 1.0-litre petrol model with 95hp, although more powerful versions with 110hp and 150hp (which also feature more standard equipment) are also on sale now.

Read on for full details of this sleeker alternative to the likes of the Volkswagen T-Cross, the Skoda Kamiq and the SEAT Arona.

Compare the best SUVs on sale

The Volkswagen Taigo Life comes as standard with LED headlights, 16-inch alloy wheels and black-painted roof rails. Inside, you get an 8-inch digital driver’s display, wireless phone charging and lumbar adjustment for both front seats.

The Volkswagen Taigo gets a similar boxy front end to the dinky T-Cross and larger T-Roc SUVs, but look closer and you’ll spot more rounded-off headlights and some racier-looking trim for the bumper – especially in R-Line guise (shown here.)

The biggest change is obvious from the side, where the new Volkswagen Taigo gets a sporty coupe-inspired roofline. OK, it’s no Audi TT but it looks much sportier than other small crossover SUVs such as the SEAT Arona and Skoda Kamiq.

You’ll have a choice of alloys ranging from 16- to 18-inches depending on your choice of trim.

A similar light full-width light bar to the T-Cross comes at the back of the Volkswagen Taigo, albeit with a much more angular layout for its LED innards.

The inside of the Volkswagen Taigo is a pretty standard affair for a small car from VW. There’s nothing outlandish going on, with a rather clean and simple design throughout.

You do get digital dials displayed on an 8-inch screen as standard though. This can be upgraded to a 10.25-inch display with configurable modes allowing you to pick which info you want to be displayed in front of you.

A 6.5-inch infotainment system with basic radio and smartphone capabilities is standard too, though you can have larger 8-inch or 9.2-inch units if you wish. The latter two also support Android Auto and Apple CarPlay, with the full-whack adding wireless smartphone mirroring.

Three petrol engines will come at the launch of the Volkswagen Taigo. Two of these are 1.0-litre petrol units, with 95hp and 110hp respectively, but there’s also a more powerful 150hp, 1.5-litre unit available.

All send power to the front wheels, with a five-speed manual gearbox standard for the 95hp car and six-speed manual offered for the 110hp and 150hp cars. You’ll have the option of a seven-speed dual-clutch gearbox too.

You’ll be able to opt for Volkswagen’s latest ‘Travel Assist’ tech on the Taigo.