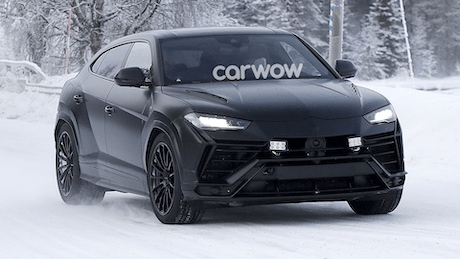 An upgraded new version of the Lamborghini Urus has been spotted, with a bump in performance and styling tweaks expected.

What? Lamborghini Urus is EVOlving! This upgraded version of the SUV has been spotted testing.

The Lamborghini Urus EVO will likely see a boost in power to compete with the Aston Martin DBX 707, plus some fresh styling tweaks. Expect to see the complete car revealed later in 2022.

With no camouflage to mask details, the changes to the Lamborghini Urus EVO’s design are clear to see.

At the front, it has a much more angular grille plus some more aggressive aero elements surrounding the headlights. You’ll spot new vents on the bonnet too, though those LED spotlights are likely just for this prototype.

Changes at the side of the car are less obvious. Based on this prototype, there isn’t anything of note. Some new alloy wheels will likely feature on the production car, though.

A slightly more aggressive rear diffuser appears to be hiding underneath a blanket of snow. Otherwise, the rear of the Urus EVO looks pretty similar to the current car.

Expect the 4.0-litre twin-turbo V8 of the current Urus to be used again in the EVO, albeit with a smidge more power.

Currently, the Urus kicks out 650hp. With the Aston DBX 707 coming along with (you guessed it) 707hp, Lamborghini could look to match or even beat that figure.

Lamborghini could also look to shed some weight from the somewhat porky 2,200kg SUV, too. If so, expect more carbon fibre bits plus some racier interior upgrades.

With this prototype uncamouflaged and looking near-ready, it shouldn’t be too long before the Lamborghini Urus EVO breaks cover. Expect to see the finished car later in 2022.

Looking for a new SUV? Take a look at the latest available through carwow