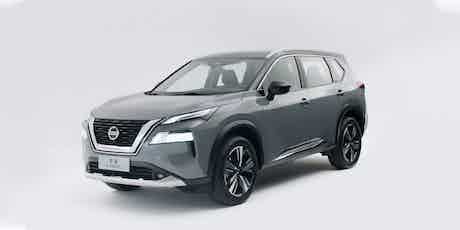 A new generation of the Nissan X-Trail has been revealed, which will be offered with the same neat hybrid system as the latest Nissan Qashqai. Read on for full details.

This is the latest version of the Nissan X-Trail, which has been revealed at the Shanghai Auto Show. It’ll be the largest Nissan SUV you can buy in the UK and an alternative to the Skoda Kodiaq, Seat Tarraco and Peugeot 5008 when it goes on sale next year. Like the new Nissan Qashqai, it comes with a clever new hybrid drive system, too.

The new Nissan X-Trail gets a complete design overhaul that sees it take on boxier, more angular styling than before.

A large, chrome-trimmed grille is flanked by split LED headlights with a claw-like shape, while the roofline is flatter than in previous models. At the rear, you’ll spot a huge silver skid plate – although it’ll only be made of plastic, so don’t expect it to offer much protection if you do venture off-road…

Much like the new Nissan Qashqai, the Nissan X-Trail will use a new ‘ePower’ hybrid engine setup that sees an electric motor power the front wheels, with its charge coming directly from a petrol engine working as an onboard generator.

Exact figures for the X-Trail have yet to be detailed, though this setup in the Qashqai uses a 1.5-litre petrol engine to charge a small onboard battery, which in turn powers a 188hp electric motor.

An all-wheel-drive version of the Nissan X-Trail has been confirmed too, though further details on this new car’s engine options haven’t been revealed just yet.

The latest Nissan X-Trail follows a similar design to the Qashqai inside, with a 12.3-inch digital driver’s display planted right in front of you as well as a 10.8-inch central infotainment system on the dashboard.

Unlike in the Qashqai, the new X-Trail will come with the option of seven seats, though details of other extras are pretty scarce at this point.

China will get the Nissan X-Trail later this year, but no word yet on when it’ll arrive elsewhere across the world.

If you can’t wait for this new car to go on sale, check out the best Nissan X-Trail offers available through carwow on the current car or compare the best SUVs on sale now.