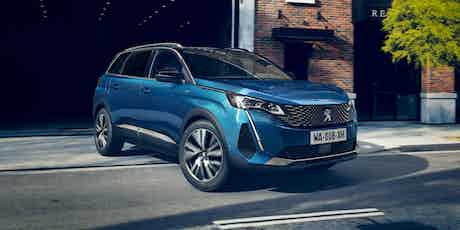 The eye-catching Peugeot 5008 has been tweaked for 2021 and now features new styling and extra safety tech.

The Peugeot 5008 has received a series of updates for 2021 to further help this practical seven-seat SUV tempt buyers away from the likes of the Skoda Kodiaq and VW Tiguan Allspace.

The most obvious changes to the front of the Peugeot 5008 are those vertical daytime-running lights. These replace the chunky foglights you got on the outgoing car and help the new SUV fall in line with the likes of the 2008 and recently revised 3008 SUVs.

The new car’s grille is now made up of numerous chrome squares that stretch from one headlight to the other. The lights themselves have also been reshaped and have lost the central fin-like cutout. The front bumper now gets a wide piece of chrome trim instead of a chunky silver insert and the black plastic inserts under each headlight are now taller and thinner.

Peugeot hasn’t changed anything about the 5008’s side profile, beside a few new alloy wheel designs, and its rear-end has escaped any major revisions, too. The bluff bootlid, upright windscreen and claw-like brake lights look the same as on the outgoing car.

Peugeot hasn’t changed much about the new 5008’s interior, so you get the same sweeping design, low-slung steering wheel and a set of lovely metal piano-like keys on the dashboard. The high-mounted 12.3-inch instrument display is no larger than on the old car, but the central touchscreen has grown from eight to 10 inches in size in all but entry-level Active models.

There are a few new trims available for the new Peugeot 5008, depending on which model you go for. The most eye-catching being the red Nappa leather seats and lime-wood door trim with chrome details you get on GT models.

As in the old car, the new Peugeot 5008 seats seven people as standard. Peugeot hasn’t changed anything about the interior dimensions, so the rearmost seats are fine for kids and should be just about roomy enough for adults on short trips.

You’ll be able to get the new 5008 with the same range of petrol and diesel engines as the outgoing car. For starters, there’s a 1.2-litre three-cylinder petrol engine with 130hp that comes with a six-speed manual gearbox or an eight-speed automatic. There’s also a more powerful 180hp 1.6-litre four-cylinder petrol engine that gets this eight-speed automatic gearbox as standard.

There’s also a pair of four-cylinder diesel engines for you to choose from. The cheapest will be a 130hp 1.5-litre engine that comes with a six-speed manual gearbox or an eight-speed automatic. There’s also a beefier 2.0-litre engine with 180hp that’s only available with an automatic gearbox. Unlike the smaller 3008, you can’t get the Peugeot 5008 as a plug-in hybrid.

The new Peugeot 5008 will come with the option of a night-vision system for the first time. This uses a forward-facing infrared camera to help detect cyclists, pedestrians and large animals and display them on the digital-driver’s display.

You can also get it with an upgraded adaptive cruise control that will maintain a safe distance to the car ahead, even in stop-start traffic. It’s available on all 5008s with an automatic gearbox as part of the Drive Assist Plus Pack. You’ll also be able to get the 5008 with lane-keeping assist, traffic-sign recognition and automatic emergency braking that works at up to 86mph.

Peugeot hasn’t said exactly what equipment will come fitted to UK cars but they’re expected to come with similar equipment levels as the cars set to be sold in Europe, outlined here.

If you aren’t a fan of the 5008’s chrome trim you can swap it out for glossy black as part of the ‘Black Pack’. This gives you a black grille, black ‘Peugeot’ and ‘5008’ badges, black roof rails and a set of black 19-inch alloy wheels.

The new Peugeot 5008 will go on sale in Europe towards the end of 2020 and should appear in UK showrooms soon after. Peugeot hasn’t announced how much it’ll cost, but expect to put aside around £30,000 for an entry-level 1.2-litre petrol model. Top-spec GT cars with a 2.0-litre diesel engine could cost from more than £42,000.