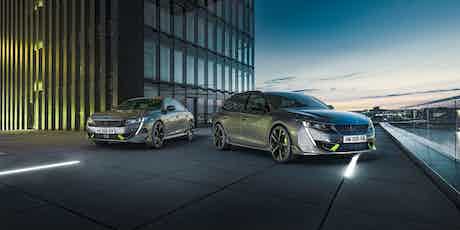 The new Peugeot 508 and 508 SW Sport Engineered have been revealed. These 360hp cars are the brand’s first high-performance hybrids.

The new Peugeot 508 and 508 SW Sport Engineered come with plenty of visual, mechanical and interior upgrades to help them compete against the likes of the BMW M340i, Audi S4 and Mercedes-AMG C43.

The new Peugeot 508 and 508 SW Sport Engineered come with a few visual tweaks over the standard cars. The headlights and vertical daytime-running lights have been carried over unchanged, but you get a darker central grille with vertical bars, a lower front splitter with upturned fins ahead of the front wheel arches and some bright green intake trims.

You’ll spot some more green highlights in the form of the brake callipers hiding behind 20-inch alloy wheels and a small badge ahead of the front doors. The alloy wheels are exclusive to these new PSE models, too, as are the dark exhaust tips at the rear and remodelled rear bumper.

The new Peugeot 508 and 508 SW Sport Engineered are the most powerful production cars Peugeot has ever made. It uses a turbocharged 200hp 1.6-litre petrol engine alongside a pair of electric motors pumping out approximately 110hp each to produce 360hp and 520Nm of torque.

One electric motor drives the front wheels while a second under the boot floor drives the rear wheels. This means the new 508 PSE is four-wheel drive and can blast from zero to 60mph in 5.2 seconds. It’ll accelerate from 50mph to 74mph in just three seconds, too, so overtaking slow-moving traffic should be a breeze.

Powering the electric motors is an 11.5kW battery pack that holds enough charge for the Peugeot 508 PSE to travel up to 26 miles on electric power alone. With the engine and motors driving the car, Peugeot claims the new 508 and 508 SW Sport Engineered will return 139mpg.

The standard Peugeot 508 comes with one of the most eye-catching interiors of any saloon car on sale, but the new Sport Engineered model looks even bolder thanks to plenty of acid-green details.

There’s bright green stitching on the steering wheel, the sports seats, the centre console and the dashboard, and the graphics on the digital driver’s display have been revamped to match. The central infotainment touchscreen is the same as the standard 508, but the menu screens have been refreshed with some new green icons, too.

The new Peugeot 508 and 508 SW Sport Engineered are expected to go on sale in early 2021. They’re faster and more complex than any 508 model currently available, so they’ll be more expensive – get ready to hand over as much as £50,000 to park one on your drive.

If you can’t wait for the Peugeot 508 and 508 SW Sport Engineered to go on sale, check out carwow’s pick of the best estate cars on sale or compare the latest offers on the best hybrid cars you can buy.