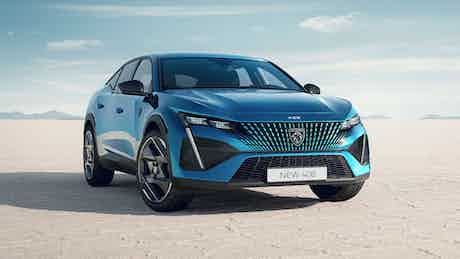 The Peugeot 408 has been revealed. It’s a new model for the brand, and will go on sale early in 2023. Read on for all you need to know.

The new Peugeot 408 has been revealed, and it’s a brand-new coupe-styled SUV.

This alternative to the Renault Arkana and Citroen C4 will go on sale in early 2023.

The new Peugeot 408 is certainly a bold thing to look at, especially at the front where you’ll spot a wide, imposing grille with body coloured strakes, a bit like the new Honda HR-V.

The 408 has a sporty-looking sloping roofline, giving it a coupe-esque appearance.

It’s still an SUV at heart, though, so it comes with the obligatory black plastic cladding around the wheel arches to fend off errant shopping trolleys in the supermarket car park.

Looking inside, the Peugeot 408’s is very similar to that of the smaller 308. Not surprising, seeing as they’re essentially the same car underneath. The design is stylish and eye-catching, with plenty of shiny trims to keep things looking modern.

You get a small steering wheel placed below the digital driver’s display. Peugeot calls this its ‘i-Cockpit’ design. It looks great but the driving position can feel a little awkward if you’re quite tall.

There are very few physical buttons to be seen, apart from the funky looking piano key switches below the infotainment screen. Watch this Peugeot 308 review to get an idea of how easy the 408’s cabin will be to live with.

The entry-level Peugeot 408 comes with a 130hp 1.2-litre petrol engine. All models get an eight-speed automatic gearbox as standard, there’s no manual option.

You’ll also be able to get the new Peugeot 408 with a choice of two 1.2-litre petrol engines with a plug-in hybrid system.

The cheaper of the two produces 180hp, but if that’s not enough you can get a version with 225hp. An all-electric e-408 will be available at a later date.

There’s no word on pricing yet, however expect it to be positioned between the 308 and the larger Peugeot 3008. Somewhere around £30,000 is a safe bet.

Cant wait for the new Peugeot 408? Check out deals on the Peugeot 308 through carwow. Did you know you can now sell your car through carwow as well? It’s quick, easy and you’l get a great price as well. Tap the button below to get started today.