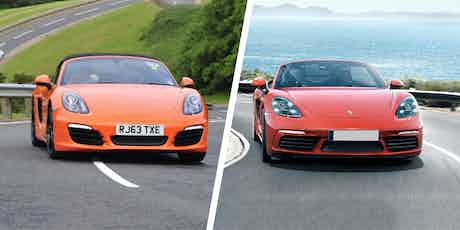 The Porsche Boxster gains the 718 name, revised styling and all-new four-cylinder turbocharged engines. We compare it to the outgoing model

Details and images have been released for the new Porsche 718 Boxster. The entry-point into the Stuttgart brand’s lineup regularly dominates the class occupied by the likes of the BMW Z4 and Mercedes SLK, and the new changes should cement its position as the sportiest option of them all.

The ‘718’ added to the Boxster’s name has historical significance for Porsche. A race car bearing the same three digits won illustrious events including the Targa Florio and 12 Hours of Sebring in the late 1950s and early ’60s. The name is significant today because those gorgeous little mid-engined roadsters were powered by four-cylinder engines – a new introduction to the Boxster lineup.

The engine might be all-new, but the styling revisions are more restrained. At the front, a redesigned bumper features a wider centre grill flanked by redesigned side vents. Though the shape of the headlights is pretty much unchanged, the internal lighting elements are new. Xenon units are standard, and a full LED setup is optional.

The most eagle-eyed Porsche fans will notice the revised side sills and larger vents at the rear edge of the doors but, in side profile, the 718 Boxster remains largely the same as its predecessor.

At the back, new, slimmer taillight units feature ‘three dimensional’ LED lighting housed within darkened lenses. The Porsche nameplate has also moved up onto a strip on the lower edge of the rear spoiler.

The interior is carried over almost unchanged from the outgoing Boxster. Only very minor tweaks to the instrument panel are there if you look hard enough, and the fitment of the latest version of the Porsche Communication Management system (PCM) features mobile phone pairing and voice activation for the sat nav.

Finally, the old rectangular cabin air vents have been ditched in favour of more rounded models and the steering wheel has been changed for one similar to that found in the new Macan and 918 Spyder.

For the first time since 1995, Porsche has moved to a four-cylinder layout in a road car. A pair of turbocharged flat-four units replace the Boxster’s old naturally-aspirated six-cylinder engines. While this might upset some purists, a quick look at the spec sheet shows the benefits the new engines will bring.

The 2.0-litre unit in the regular 718 Boxster produces 296hp – 25hp up on the 2.7-litre six-cylinder in the outgoing Boxster. Perhaps more important in everyday use is the increase in torque – a rise of 66lb ft to 280lb ft, produced lower in the rev range, means the 718 will feel more flexible – especially considering one of the minor bugbears of the outgoing model was that its gearing was too long.

The larger 2.5-litre unit fitted to the Boxster S offers 345hp and 310lb ft, enough to achieve a 4.2 second 0-62mph time and a top speed of 177mph. That latter figure isn’t just better than the old model, but 0.3 seconds faster than the Boxster Spyder – the most potent version of the outgoing car. Gearbox options remain the same as before, with both the 2.0 and 2.5 available with either a six-speed manual or seven-speed PDK dual-clutch ‘box.

The Boxster was already an exciting car to drive, so it isn’t surprising to discover the changes here are fairly modest. The steering is 10 per cent more direct (whatever that means) than before and Porsche’s adaptive suspension, known as PASM, has been retuned so the comfort setting is softer and the Sport setting is firmer.

The PASM Sport Chassis is firmer still. It drops the ride height by 20mm, and is optionally available for the 718 Boxster S.

The added performance the new engines bring is all well and good for the rare opportunities you’ll have to drive enthusiastically, but the boost in fuel efficiency should come as a welcome surprise, too.