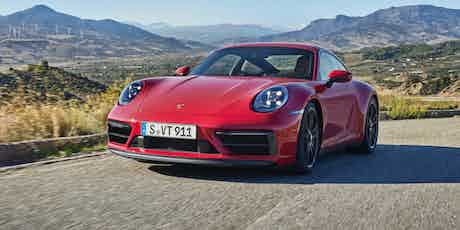 This is the latest version of the Porsche 911 GTS, which takes the Carrera S and ups the ante.

It serves as a stepping stone between the regular 911 line-up and the hardcore GT models, coming with more power and performance-oriented chassis tweaks — going up against the Mercedes-AMG GT S and Audi R8 Performance.

The Porsche 911 GTS gets some subtle design changes, with tweaked front and rear bumpers plus some black styling elements.

These include the badges and some bumper trims plus, in the case of the Targa, the roof bar.

The standard-fit sports exhaust comes with black tailpipe surrounds as well, while its alloys (20-inches at the front and 21-inches at the rear) come with a centre-locking wheel nut.

Just as with any Porsche 911, the GTS gets a slick-looking interior full of near-limitless customisation options.

There are some specific tweaks for the GTS, though. Opt for a car with a manual gearbox and your gearstick will be 10mm lower than on a Carrera S, while a GT Sport steering wheel comes as standard on all versions of the GTS.

There’s a new optional GTS interior package as well, which brings red or grey stitching along with embroidered GS logos to the headrests of the seats.

An upgraded infotainment system debuts on the GTS too with plans to roll it out across the 911 range. This includes an upgraded ‘Hey Porsche’ system, along with support for both Apple CarPlay and now Android Auto for the first time.

Powering the Porsche 911 GTS is the same turbocharged 3.0-litre flat-six engine found in the Carrera S, albeit with power boosted up to 480hp and 570Nm of torque.

That’s delivered to the rear wheels (four-wheel-drive in Targa 4), with the choice of an eight-speed PDK automatic gearbox or a seven-speed manual. As a result, the 0-60mph sprint is covered in 3.3 seconds.

With the GTS serving as the gateway to the full-blown Porsche 911 GT models, it gets some appropriately racy suspension tweaks.

The active setup has been borrowed from the 911 Turbo, although it has been tweaked slightly to suit the GTS models. This brings the car 10mm lower than the Carrera S.

Larger brakes are also nabbed from the Turbo for the sake of improved stopping power, and you can take the car a little bit further towards being track-ready with an optional ‘Lightweight Design’ package. This brings carbon fibre seats with lightweight glass to save 25kg.