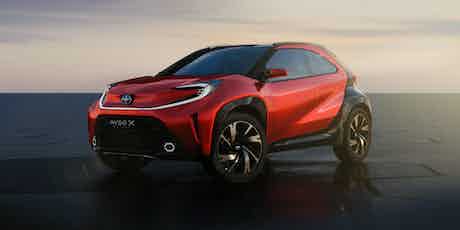 This new Toyota Aygo X Prologue concept shows you what to expect when the new Aygo city car is revealed soon. Read on for full details.

This is the Toyota Aygo X Prologue which, as you may have guessed, previews what the next-generation of the Aygo city car will look like.

It’ll be an alternative to the likes of the Hyundai i10 and Kia Picanto when it goes on sale, potentially in 2022. Toyota is pretty hush on details underneath the skin, but if this concept is anything to go by, the next Aygo is shaping up to be one of the most exciting-looking city cars on sale.

Being a design concept, the Aygo X Prologue is pretty outlandish and interesting — just don’t expect it to go into production looking exactly like this.

There are certainly some interesting details that could make it to the road, though, such as the claw-like LED headlights connected by an unbroken strip, with a pretty large grille up front.

Down the side of the Toyota Aygo X Prologue, you’ll see a swooping two-tone paint scheme (the red is called Sparkling Chilli, in case you wondered) as well as bulky wheel arches. Big wheels give it an SUV-like stance and there’s even ‘Aygo X’ lettering on the tyres. The finished car will come with smaller heels and conventional tyres.

This new concept is recognisable as an Aygo at the back, though. Tall ribbon-like brake lights are a signature feature of the city car, and mimic the front a bit by wrapping right around the tailgate through an unbroken light strip. There’s a bicycle holder mount at the bottom, too.

For all their efforts with the exterior design of the Aygo X Prologue, Toyota’s chief pencil scribblers must’ve taken the afternoon off when it came to the interior because, err, there aren’t any photos of it.

What the production version of the concept will be like inside is pretty guesswork at this point, then. It could mimic the Yaris Cross — meaning a pretty simple but practical design, with a nice, large touch screen fitted atop the dashboard. Expect it to seat four, albeit pretty tightly.

There are no details on what’s powering the Toyota Aygo X Prologue, though it’s a strong possibility that the production car will come with a compact hybrid system, such as in the slightly larger Toyota Yaris. A cheaper petrol-only model is also possible, as is a fully electric version.

You can expect it to cost slightly more than today’s £12,000 Aygo, especially if Toyota produces an electric version.

Can’t wait to see the new Toyota Aygo? Take a look at offers on the current version or get help picking your next car