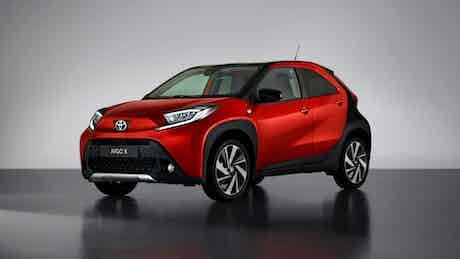 The new Toyota Aygo X has been revealed ahead of it going on sale early next year. Read on for all you need to know about this all-new compact crossover.

Toyota has revealed the new Aygo X, a dinky crossover SUV that’s taller and roomier than the current Aygo hatchback.

Few equally small city cars are offered as a jacked-up SUV inspired crossover, but you can consider the new Toyota Aygo X as an alternative to the likes of the Suzuki Ignis.

Imagine the new Toyota Aygo X as the result of a romantic weekend between the current Aygo and the new Toyota Yaris Cross, and you’re on the right track.

You can see the Aygo X has some modern LED headlights and some bold creases in the bumper, while its bluff, snub-nosed front end looks more like it belongs on a large family SUV than a compact city car.

Check out the latest small-car offers

The side profile is where the SUV styling touches really stand out, though. The new Aygo X is 11mm higher than the current Toyota Aygo and it has plenty of black plastic cladding on the wheel arches.

This would usually help protect the paintwork of serious off-roaders from sharp rocks and branches, but it should do an equally good job deflecting wayward supermarket trollies.

The rear end looks fairly similar to the current Aygo, with the tail lights spanning the whole height of the glass tailgate.

The Aygo X is offered in a variety of bold two-tone paint schemes, as well as having the option of a retractable canvas roof in Aygo X Air models.

The inside of the new Toyota Aygo X is as you would expect from a city car, with a logical layout and a few colourful trims about the place to liven things up. Limited Edition models (the first to go on sale) will come with the bright orange inserts you can see below.

You also get some body-coloured trim on the door panels, as well as X logos embroidered into the seats.

The new Aygo X comes with a 9-inch touchscreen infotainment system, along with Apple CarPlay and Android Auto (wired in entry-level cars, but wireless in top-spec models). There is also an upgraded JBL sound system on offer and a wireless charging pad for your phone.

You can only get one engine in the new Toyota Aygo X, a 1-litre three cylinder petrol unit with 72hp (plenty for nipping around the city streets.) You can have it with either a 5-speed manual or a CVT automatic gearbox.

The 11mm rise in ground clearance and 55mm rise in the seating position over the current Aygo should yield better visibility in traffic.

While prices haven’t been announced yet, it’s highly likely that it will be slightly more expensive than the current Aygo. Around £15,000 likely is a safe bet.

Can’t wait for the new Toyota Aygo X? Check out our latest Aygo deals offered on the current car or compare the best SUVs on sale now. Not sure what you want? Click the button below to get help configuring your next car.

Help me choose my next car