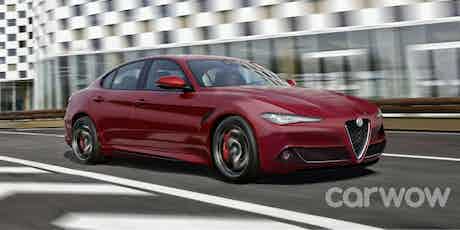 Rumours suggest Alfa Romeo will build a BMW 5 Series rival. Thought to be called the Alfetta, it could get petrol and plug-in hybrid power

Hot on the heels of the all-new Giulia, Alfa Romeo looks set expand its range further with a new mid-size executive saloon. It’s a class the brand hasn’t competed in since the 166 was phased out in 2007 and, like that model, the new car should offer a stylish alternative to the Mercedes E-Class, Audi A6 and BMW 5 Series. The brand has yet to confirm any details or even the model’s existence but a glance at the Alfa Romeo back catalogue suggests the name Alfetta as a likely candidate. Our exclusive render above shows what the car could look like should Alfa Romeo decide to build it.

Generally, executive cars of this type are somewhat conservative in their appearance – the A6, 5 Series, E-Class and Jaguar XF all look fairly subtle from the outside. The Alfetta is likely to follow suit by avoiding radical styling, but it’ll stand out thanks to iconic Alfa Romeo cues including the shield-shaped front grille and offset number plate.

The Giulia’s cabin has shown that Alfa Romeo’s build quality has vastly improved compared to previous models, even if it ultimately can’t quite match its established German rivals. The smaller Giulia is very spacious however, so the new model has the potential to become one of the most accommodating cars in its class.

Under the skin, the new big saloon is expected to use a stretched version of the Giulia’s platform. That means the new car will offer buyers a choice of rear or four-wheel drive. Though a six-speed manual is likely to be available in other markets, it’s possible that UK buyers will only get the option of an eight-speed automatic ‘box. Entry-level models will be powered by the same four-cylinder petrol and diesel engines currently found in the Giulia. To compete with German rivals, a six-cylinder diesel will also feature and it’s possible that a plug-in hybrid version could appear later in the car’s life. In addition, semi-autonomous driving tech will be available across the range, too. Should a performance model be release, it’ll almost certainly use an engine derived from the 503hp 2.9-litre V6 used by the speedy Giulia Quadrifoglio.

We won’t be seeing the new model any time soon – Alfa Romeo is currently undergoing an extensive range overhaul which not only includes the new Giulia, but the upcoming Stelvio SUV and a replacement for the Giulietta hatchback. All these models are expected to make their debut first, so expect at least a 2018 release for the big saloon.