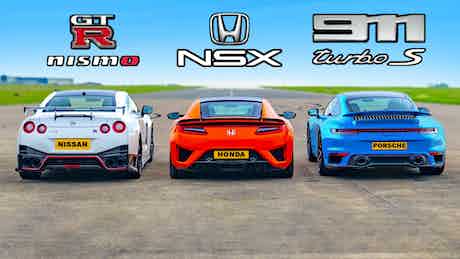 There’s no doubting the Porsche 911 Turbo S has become a king of the carwow drag races, but can it hold its crown against two other all-wheel-drive sports cars?

Here to face off against the all-conquering German are two beasts from the east — the Nissan GT-R Nismo and Honda NSX.

Let’s start with the Nismo. It’s powered by a 3.8-litre twin-turbocharged V6 producing 600hp and 652Nm, sent to all four wheels through a six-speed automatic gearbox. It’s pretty heavy though, tipping the scales at 1,725kg.

It’s not quite as heavy as the Honda NSX though which — perhaps as a result of hybrid assistance for its 3.5-litre twin-turbo V6 — comes in at 1,759kg.

It’s down on power on both the Porsche and Nissan too, with 581hp and 645Nm of torque. That’s delivered to an all-wheel-drive system through a nine-speed automatic gearbox.

Just like both Japanese challengers, the Porsche 911 is a twin-turbocharged six-cylinder car, albeit with the traditional Porsche flat-six layout. It kicks out 650hp and 800Nm to all four wheels through an eight-speed PDK automatic gearbox, in a car weighing 1,640kg.

Will it retain its all-wheel-drive sports car crown, or can the Nissan or Honda take royalty? Watch on to find out…