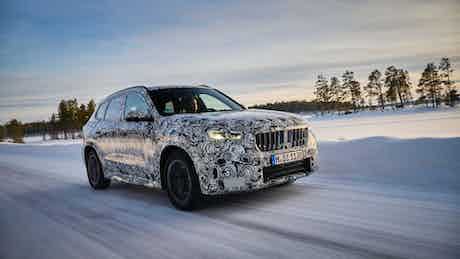 The all-new BMW iX1 electric car has been teased during extreme weather testing, and it’s due to go on sale in the Autumn. Read on for all you need to know about this highly anticipated SUV.

BMW has teased the new iX1 during extreme weather testing in Sweden. It’s a new electric SUV which will be based on the upcoming BMW X1, meaning petrol and diesel model will also be available.

This is BMW’s first fully electric small SUV, and is one of 13 new EVs coming from the German brand over the next three years. It’ll be an alternative to cars such as the Mercedes EQA and the Volvo C40 Recharge, and will have around 270-miles of range.

The above teaser image of the new BMW iX1 was revealed earlier this year. It seems as though the trend of huge kidney grilles on BMW SUVs will be continued on this car, although they’ll likely be blanked off for this electric car.

You can also see a new daytime running light design within a slim and angular housing. It looks like the iX1 will also get some huge air intakes as well.

These camouflaged images from BMW show that the iX1 will look more or less the same as the new BMW X1, which is no surprise really given that they’re both the same car underneath.

It looks as though it’ll borrow the flush-fitting door handles from the BMW i4 as well.

The lack of an exhaust pipe peeking out from the bumper is about the only thing separating the rear of the electric iX1 from its petrol-powered X1 sibling.

There is a far more prominent rear bumper than the current model and the steeply raked rear roofline mimics that of the slightly sportier BMW X2.

The new BMW iX1 will have between 257 and 272 miles of range according to BMW. The model being tested here also has dual electric motors, one on the front axle and one on the rear, meaning it has all-wheel-drive.

No information has been revealed regarding the motors’ power yet, however the iX1 may share electrical components with the larger BMW iX3. That model produces 286hp, but the smaller iX1 may get slightly less than that.

You can charge the BMW iX3 using a super-fast 150kW option (offering up to 60-miles or extra range in 10 minutes). It’s likely the new iX1 will also come with a 150kW fast-charging feature. A home wall-box will take around 12-hours to fully replenish an empty battery.

The current X1 feels sportier than most small SUVs, and you can expect the new iX1 to also be one of the best compact electric SUVs to drive.

The new BMW iX1’s interior is likely to be based heavily on today’s 1 Series. It’ll have plenty of high-quality materials throughout and the latest iDrive infotainment system.

It may get an infotainment system similar to the larger BMW i4, however, with a curved one-piece screen for the driver’s instrument display and central touchscreen.

Check out these BMW i4 deals

The electric BMW iX3 loses out on around 40 litres of boot space compared with the petrol- and diesel-powered X3. You can expect the new iX1 electric car to also have a smaller boot than the standard X1.

BMW hasn’t announced how much the new X1 or iX1 will cost, but it’s a safe bet that the new electric SUV will be significantly more expensive than the outgoing X1.

This means you’ll have to hand over at least a few thousand pounds more than the existing £40,580 plug-in hybrid X1 model to park an iX1 on your drive when it goes on sale. It’s expected to be revealed alongside the new BMW X1 later in 2022, with deliveries starting in early 2023.

Can’t wait for the new BMW iX1? Check out the best deals on the current BMW X1 through carwow. If you’re looking for the easiest way to change your car, tap the button below to get help selling your car and buying your new one.