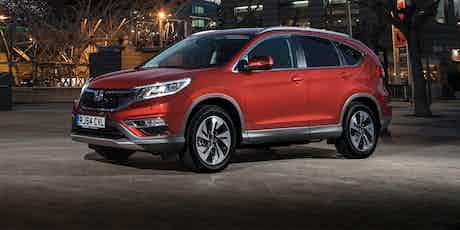 If you’re looking to buy a Honda CR-V, you’re not alone. The Japanese marque’s British-built motor is the best-selling SUV in the world right now, despite some seriously talented competition. Its extensive facelift has brought a new diesel and some new technology so we’ve broken down the pricing details.

The basic model comes with a 2.0-litre petrol engine and a six-speed manual gearbox and costs £22,340. You get quite a lot of kit as standard, though, including climate and cruise control, USB input, one-touch folding rear seats, vehicle and trailer stability controls and brake assist.

SE trim adds a leather steering wheel and gearstick, auto lights and wipers, parking sensors and a rear-view camera, an infotainment screen, and paddle shifters for the automatic gearbox. Stepping up from S to SE costs £2,170. An additional £3,055 buys the SR which gets part-leather upholstery, heated front seats, an upgraded stereo, satellite navigation, tinted windows and xenon headlights. Finally, EX brings full-leather, electric seats, a powered bootlid and a panoramic glass roof – for an extra £1,845.

An additional £1,060 gets you the lower-powered diesel instead of the less-desirable petrol and will reduce your running costs, too. An extra £2,000 buys you the newer, more powerful diesel which gets four-wheel drive as standard, and £1,780 buys you the new nine-speed automatic gearbox.

Honda CR-V – which should I get?

So a top spec CR-V with all the toys will cost an eye-watering £35,620. We’d recommend those looking to save money to look at the lower-powered diesel in S trim. At £23,400 it’s much cheaper than top-spec models and gets most of the kit you’re likely to need. Those looking to spend a little more should look at the higher-powered diesel in SE trim with navigation and the new auto – at £30,520, it gets all the equipment you need with the best engine and gearbox combination.

Compared to rivals like the Mazda CX-5 and Ford Kuga, it’s quite pricey. Top-spec Mazdas cost from £29,895 and top spec Fords cost £33,530. Residual values indicate that the Honda matches the Mazda for value retained but slightly trails the Ford.

Read our reviews of the Honda CR-V, Mazda CX-5 and Ford Kuga then head over to our car configurator to see how much you could save. Don’t forget to check out our full preview of the CR-V’s facelift and our comparison between old and new, too.