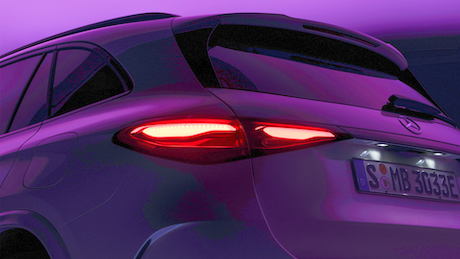 The new Mercedes GLC has been teased in official images before this new hybrid-only SUV makes its debut in early June. Read on for all you need to know.

The new Mercedes GLC has been teased in an official image before it makes its public debut on the 1st of June this year.

This box-fresh version of Mercedes’ mid-sized SUV is already shaping up to be a tempting alternative to the Audi Q5, BMW X3 and Jaguar E-Pace thanks to a completely new interior and a range of brand-new hybrid engines.

This official teaser image from Mercedes shows the new GLC will have a similar bluff rear end to the current car, but is also set to get new brake lights and additional (albeit fake) vents behind the rear wheels.

These features both take inspiration from EQ-branded Mercedes electric cars, including the new EQE saloon and EQS SUV. Watch Mat’s video (below) to see more of that car.

Handily, Mercedes GLC prototypes have also been spotted out and about, showing you what the rest of this new upmarket SUV will look like.

You can spot a set of slim LED headlights and a wide grille up front, while holes in the tightly-wrapped camouflage show there’ll be an extra air intake underneath.

This new car features two strong creases down each side linking both wheel arches to the front door handle.

This replaces the old car’s single crease design and makes the new GLC look slightly lower and a touch sportier.

The new GLC looks set to get a set of conventional door handles rather than the flush-fitting items you find on the EQS and EQE electric cars.

The new Mercedes GLC’s rear is pretty well covered in these photos, but you can just see the LED taillights poking through, as well as a fairly large roof-mounted spoiler.

Mercedes has confirmed every new GLC SUV will come with some form of hybrid engine and four-wheel drive as standard.

There will still be a plug-in hybrid version of the GLC that Mercedes says has a big enough battery to let you drive for more than 62 miles in electric-only mode before the engine has to chime in to lend a hand.

A new version of the Mercedes EQC electric car is also likely to appear soon after the petrol- and diesel-powered car’s launch.

There will inevitably be a couple of high-performance Mercedes-AMG GLC models. It’s a safe bet that the AMG GLC 43 will share its engine with the recently revealed C43 saloon.

This means a 2.0-litre turbocharged engine also shared with the Mercedes-AMG A45s with 408hp and 500Nm of torque. A more powerful GLC 63 plug-in-hybrid version with more than 500hp is set to arrive later using parts borrowed from the upcoming AMG C63 plug-in hybrid.

No images have surfaced of the prototype Mercedes GLC’s interior, but it’s almost certainly influenced by that of the new C-Class, shown above.

It’s been confirmed that the GLC will get a 12.3-inch digital driver’s display, along with an 11.9-inch infotainment touchscreen with the latest MBUX user interface, as seen on the Mercedes C-Class.

It looks like the GLC is a little longer than before too, meaning more legroom in the back for your passengers.

Expect the new GLC to feature a suite of advanced driver-assistance systems and an improved infotainment system, related to that in the latest Mercedes S-Class.

The new Mercedes GLC SUV will make its debut on the 1st of June 2022.

Given that the new car will be bigger and feature hybrid technology as standard, it’s a fair bet that it’ll cost several thousand pounds more than the equivalent model today. An entry-level GLC 220d Sport currently sets you back over £40,000, so the new car could hit you with a bill for close to £45,000.

See how much you can save on the current model by heading over to our Mercedes GLC deals page or check out the latest offers on the best SUVs on sale.