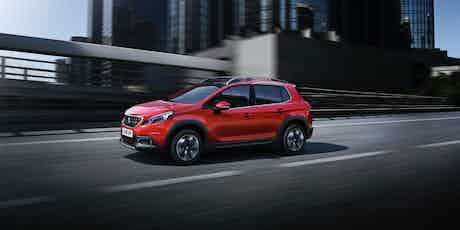 Peugeot has announced extensive updates to the 2008 compact crossover SUV. It gets a new front end and the same efficient engines

Peugeot has revealed the heavily facelifted 2008 crossover. The compact SUV features revised exterior styling with a new, larger grille that features chrome elements. The headlights are unchanged but seem to suit the new grille better than the original one. The exterior features a more SUV-inspired look with new wheelarch cladding and scuff plates for mid-range Allure trim and upwards.

Before the new model arrives following the 2016 Geneva Motor Show in March, the brand will be offering progressively bigger discounts on the outgoing model. Put the current Peugeot 2008 in our car configurator to see the deals carwow could help you get.

Power comes from either a 1.2-litre three-cylinder petrol or a 1.6-litre diesel engine – both offered in a range of power outputs from 75hp to 130hp. Depending on trim and engine power, they’re offered with either five- or six-speed manual or automatic gearboxes. The 1.2-litre petrol with 130hp returns a best in class 58.9mpg, as does the 120hp 1.6-litre diesel at 76.3mpg.

The car also boasts Peugeot’s advanced ‘Grip Control’ stability control in lieu of a fuel-sapping four-wheel-drive system. This system can be optimised for various conditions including snow, mud and sand and controls engine power to prevent skidding.

Inside, owners will find Mirror Screen which combines your smartphone to the car’s 7-inch touch screen via MirrorLink or Apple CarPlay. Autonomous emergency braking as well as self-parking are also available along with a reversing camera.

Peugeot has also added a new trim level called GT Line which it describes as providing “customers with a sporty and chic environment that has great appeal.” It comes with new alloy wheels and gloss black instead of chrome trim on the grille, fog lights, mirror casings and roof bars.

If you can’t wait, put the current 2008 through our configurator to see the deals on offer. Or use the carwow car chooser to narrow down your search.