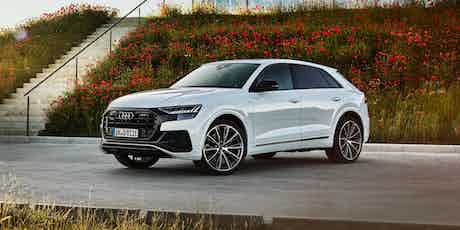 The Audi Q8 flagship SUV is now a smidge more eco-friendly thanks to a choice of plug-in hybrid engines.

The Audi Q8 Coupe SUV makes a big impact wherever it goes, but its environmental impact has got that little bit smaller thanks to a choice of new plug-in hybrid engines.

Both versions of the Audi Q8 TFSI e quattro are powered by a turbocharged, 3.0-litre V6 petrol engine producing 340hp. The difference is in the electric motors. The lower-powered Q8 55 TFSI e quattro produces a total of 381hp and 600Nm of torque while the Q8 60 TFSI e quattro musters a total of 462hp and 700Nm.

Predictably, the less powerful 55 is more efficient – Audi says it’ll return 100mpg on the WLTP test cycle and Co2 emissions of 65g/km. The 60 manages around 97mpg WLTP and 66g/km. There’s no difference between them in EV mode, however: both can travel for almost 30 miles using electric power alone.

Recharging at the maximum 7.4kW from an AC wall-box outlet, the batteries are full in 2.5 hours. On the move, the engine acts as a generator to recharge the batteries.

The battery that provides this electrical oomph has to go somewhere, and Audi’s chosen to tuck it under the boot floor, which means boot space drops from 605 litres in the standard Q8 to 505 litres. Besides its smaller load-bay, the only clues that you’re looking at an eco-conscious Q8 are the charging port flap and a little ‘TFSI e’ badge on the tailgate.

No Q8 model is short on kit and these plug-in hybrid models come just as ram-packed with satnav, Matrix LED headlights, air suspension, a reversing camera and plenty of driver assistance/safety aids. Both versions come in S line trim with a sporty looking bodykit and 21in wheels as standard.