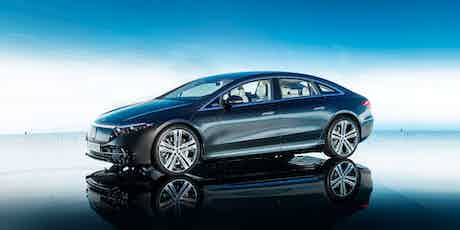 The 2021 Shanghai Auto Show is happening this week, and features plenty of new-car launches from many major brands. Read on to see the latest new cars, concepts and updates.

The 2021 Shanghai Auto Show is one of the first global motor shows to welcome visitors since the start of the Coronavirus pandemic. It takes place from 21-28 April and features plenty of new-car launches from plenty of big brands.

The global move towards electrification will see many major auto manufacturers announcing their latest hybrids and EVs while the ever-growing SUV market will see a number of new and updated models joining its ranks.

The new Audi A6 e-tron is only a concept for now, but it shows you what the upcoming A6 saloon will look like when it goes on sale in 2023. The headline figures are its 435-mile range thanks to a 100kWh battery pack, which is compatible with 270kW chargers (where available).

Get more info on the Audi A6 e-tron

Both rear- and four-wheel-drive options will be offered with the most powerful variants producing up to 476hp. Possibly the most impressive thing about the Audi A6 e-tron, though, is just how stunning it looks.

The Audi Q4 e-tron looks like a thoroughly modern SUV from the outside and its advanced electric motors, augmented reality head-up display and use of recycled interior materials all help it stand out from other all-electric alternatives.

Read all about the Audi Q4 e-tron

Either a 52kWh or 77kWh battery pack will be available once the Q4 e-tron goes on sale in June, giving this electric car up to 328 miles of range (if you pick a more aerodynamic Sportback model.) Expect it to cost from around £36,000 when this Mercedes EQA-alternative goes on sale soon.

BMW’s iX electric SUV has just been revealed and the German carmaker will be displaying its EV range-topper at the show. With dual electric motors producing between 300 and 500hp and delivering more than 373 miles of range, the BMW iX should be a worthy alternative to the Audi e-tron and Mercedes EQC electric cars.

Get more details on the BMW iX SUV

While the exterior is suitably futuristic in its design, the minimalist interior with its huge 14.9-inch central touchscreen and hexagonal steering wheel really set the BMW iX apart.

The latest BMW M3 and M4 are already on sale in the UK in the top-sepc Competition guise. The four-wheel-drive xDrive variants are due to arrive in summer 2021 and have just been revealed at the Shanghai Auto Show.

Check out the new M3 and M4 xDrive

While their engines are mechanically identical to the standard rear-wheel drive cars, the added grip of the all-wheel-drive system brings the 0-60mph time down from 3.9 to 3.5 seconds. A rear-wheel-drive mode, as found in the new BMW M5, still allows for tail-out antics when conditions allow.

Citroen is back on-form producing jaw-dropping designs and the upcoming C5 X does not disappoint. The layout of this new model is said to offer the benefits of an estate car, saloon and SUV all in one design, whether that is truly the case remains to be seen…

Get the latest info on the Citroen C5 X

When it goes on sale later this year, you can expect a range of petrol and plug-in hybrid engines as well as a new comfort-focused active suspension system.

The Ford Evos is only planned for China at the moment, but plenty of its design details could make it into other Ford models in the future. The four-door Evos fuses the lines of an SUV, saloon and hatchback into one design, much like the Citroen C5 X.

The enormous 27-inch touchscreen mounted in the centre console dominates the interior and apparently has built-in artificial intelligence capabilities. The powertrain details have not been revealed yet, but it’s likely to come with a hybrid or fully electric setup.

Genesis is set to come to the UK later this year, which makes its reveal of the Electrified G80 luxury saloon at the show all the more exciting. The Genesis Electrified G80 isn equipped with a dual-motor setup and features minor changes to the grille and rear bumper compared to the petrol-powered G80.

Based on the E-GMP technology of the latest Hyundai and Kia EVs, the Genesis Electrified G80 will have 350kW fast charging capabilities and offer a range of up to 311 miles while still being capable of a 4.9-second 0-60mph time.

An updated Lexus ES has been revealed at the Shanghai Auto Show. The most notable changes are new ‘BladeScan’ adaptive LED headlights and new wheel and paint colour options. Under the skin the rear suspension has been tweaked to make the car more agile at high speeds and the hybrid motor’s regenerative braking system has been optimised even further.

Available in the UK later this year, the Lexus ES will also be fitted with the brand’s latest Safety System+ suite of driver assistance features.

The Maserati Levante will be receiving a hybrid 2.0-litre four-cylinder engine later this year that is said to offer the performance of its entry-level V6 offering but with far greater efficiency.

The system will use a 48V mild-hybrid setup to recoup energy during braking which can then power an electric motor that assists the petrol engine at low revs. The combined 330hp on offer gets the hybrid Levante to 60mph from rest in under 6-seconds.

Mercedes has already given the EQA the EV treatment, and the next of its cars to be converted to electric power is the GLB. Called the EQB, this new electric seven-seater comes with a subtly altered exterior and some mild interior updates.

Read all about the new Mercedes EQB

The first version to go on sale in 2021 is expected to offer a 66.5kWh battery and up to 297 miles of range. More powerful variants will be introduced later.

Mercedes’ vast range of upcoming EVs promises to cover just about every motoring niche, and the recently announced Mercedes EQS is about as expensive and luxurious as they’ll get – it’s essentially an electric S-Class but packed with even more tech. Aside from the striking design and two-tone paintwork, the EQS will be available with a massive glass Hyperscreen display that covers the entire dashboard and console with 3 integrated screens.

Get all the details on the Mercedes EQS

The battery and motor options are just as impressive as the rest of the car. It’ll be offered with a 108kWh battery delivering up to 478 miles of range, and all models will be capable of using super-quick 200kW public chargers.

This two-seat electric sportscar  is said to offer almost 500 miles of range and a 0-60mph time of less than 3.0-seconds. Fingers crossed this car makes it to production without losing too much of that visual wow factor.

The new Nissan X-Trail is due to go on sale next year and it has just been unveiled at the Shanghai Auto Show. Design-wise, it follows the pattern set by the new Nissan Qashqai, and looks much more modern than the outgoing car.

Check out the new Nissan X-Trail

This popular SUV will be offered in the UK with a new ePower hybrid drive system producing 188hp, giving the X-Trail strong performance as well as the promise of low consumption figures. As with today’s X-Trail, you’ll be able to get it with seven seats.

No Chinese motor show would be complete without a number of suspiciously familiar-looking designs from local auto manufacturers, and Ora has certainly taken liberties with its latest creation. To the casual observer, the Ora Punk Cat looks like a modernised interpretation of the classic VW Beetle, but it is in fact an independently designed EV with no official links to Volkswagen.

The interior offers up an interesting mix of classic and futuristic design cues with the ‘50s style steering wheel and large landscape-oriented infotainment screen being the most notable features. The Ora Punk Cat is unlikely to make it to our shores anytime soon.

The name may be a tongue-twister but the new Toyota bZ4X’s angular design language is right on the money, successfully combining the best elements of the current RAV4 and Prius.

Get more info on the Toyota bZ4X

The bZ4X is mooted for a 2022 release date, and although Toyota hasn’t revealed any details about the car’s performance, it has confirmed that it will have a dual motor setup and an all-wheel-drive system that was developed with Subaru. The interior comes with the obligatory digital display and large touchscreen infotainment system but thankfully there are also actual buttons to control certain functions.

Volkswagen has already revealed the ID3 and ID4 electric cars, but it plans to offer an even larger SUV for Chinese customers in the shape of the seven-seater ID6. This model uses the same underpinnings and platform as these smaller SUV’s but will be an additional 30cm longer than the ID4 to accommodate an extra row of seats.

Pick a model with the largest 77kWh battery and the ID6 has up to 365 miles of range. Performance levels should be similar to the ID4, although the slightly heavier ID6 won’t feel quite as nippy.

If you can’t wait for these new cars to go on sale, compare the latest new car deals available through carwow or check out the top 10 electric cars currently on sale.