Munich Motor Show: The A-Z guide of the cars revealed 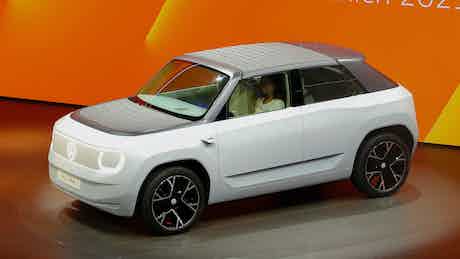 Looking for a breakdown of the key cars to be revealed at the Munich Motor Show? Well, this is just the thing for you…

The Munich Motor Show (officially known as IAA Mobility) has been and gone, and there are loads of new cars to take in — especially if you keep a keen eye on the latest electric vehicles.

Looking for a breakdown of the key cars to be revealed at the show? Well, this is just the thing for you…

Could this be the next Audi A8? The Grand Sphere Concept is a preview of where Audi’s big luxury saloons are going in the future — and electric of course.

This concept features a 720hp dual-motor setup, along with an ultra-futuristic interior with eye-tracking technology within the infotainment system.

This is how the car of 2040 could look. Well, as long as it’s a BMW anyway. The i Vision Circular is a concept made from fully recycled materials, and every component on the car is said to be recyclable too.

Oh, and because it’s an electric BMW, it gets a soundtrack composed by Hans Zimmer of Inception, The Lion King and Cool Runnings fame.

Read more on the BMW i Vision Circular

If no-holds-barred race car concepts are your thing, the Cupra UrbanRebel Concept will be right up your street.

This dinky yet hugely bewinged car packs a 429hp punch from a single electric motor and will inspire an eventual road car.

Though the Cupra Born isn’t a particularly new sight, its first real public debut has only just happened.

Production of this Volkswagen ID3-based electric hatchback is set to start this month and comes with a 12-inch infotainment system as standard.

Read more on the Cupra Born

In a show full of complex EVs, it’s refreshing to see the no-nonsense, back-to-basics Dacia Jogger at IAA Munich.

This seven-seat SUV is likely to lay claim to being the most affordable of its kind on sale in the UK and comes with neat features such as a lift-up middle row and a built-in smartphone holder.

Read more on the Dacia Jogger

Europe is set to get a different version of the Kia Sportage from the one the rest of the world has, and this is it.

It’s a little smaller in dimensions — likely to better suit our twistier roads — and gets an ever-so-slightly different look at the back.

Read more on the Kia Sportage

If you want the ultimate in luxurious electric cars, the Mercedes-Maybach EQS Concept is about as close as you’re getting at the moment.

This plush take on the EQS SUV brings a ton of chrome trim, 24-inch alloy wheels and an eye-catching two-tone paint job to the world of electric cars.

This is the Mercedes EQG Concept which, on the face of things, looks like someone just switched out the grille and wheels on a regular G-Class.

The EQG Concept does pack four electric motors though, with it previewing a production car that’s set for 2024.

Read more on the Mercedes EQG

The Mercedes EQE is essentially an electric equivalent to the E-Class, and borrows a lot of technology from the posher EQS saloon.

It’s said to be roomier than a standard E-Class and packs a 90kWh battery that’s good for 410 miles of range.

Read more on the Mercedes EQE

The V8-lovers at AMG have gone electric for its latest model. This is the Mercedes-AMG EQS, which packs a 761hp punch from two motors — one on each axle.

Read more on the Mercedes-AMG EQS

This isn’t just some flash-in-the-pan concept, rather the Porsche Mission R is your first look at an upcoming all-electric race car.

It uses two electric motors to produce 1,088hp and has a top speed in excess of 186mph.

The Renault Megane is going all-electric. This new generation of the hatchback takes on two motor options with up to 218hp, as well as a brand new infotainment system based entirely on Google software.

Smart usually makes very small cars, but the Concept #1 isn’t quite so dinky. This SUV is the largest car from the firm yet and packs enough batteries for around 300 miles of range.

A production version of the Concept #1 is coming in 2023.

Read more on the Smart Concept #1

At £17,000, the Volkswagen ID Life could become a hit among younger motorists looking for their EV fix.

This is just a concept for now but will make production in 2025 and likely as the ID 2. It comes with 250 miles of range, flip-down seats and a built-in camera.