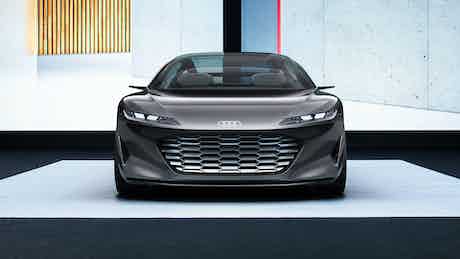 This is the new Audi Grand Sphere, an electric concept car that previews a new A8-sized Audi luxury EV that’s set to go on sale in 2025. Read on for full details.

This is the new Audi Grand Sphere –it’s a brand-new concept that’s packed with Audi’s latest infotainment and self-driving technology – some of which is straight out of the Star Wars universe.…

This car won’t actually go into production, but it shows you what Audi’s replacement for the A8 saloon and an alternative to the Mercedes EQS could look like.

The new Grand Sphere looks fantastic, doesn’t it? It’s a big luxurious 4-door like the regular Audi A8, but it somehow manages to look even sleeker than the low-slung Audi e-tron GT.

OK, so that front grille is completely fake. But, can you imagine an Audi without a big shiny mouth at the front? How weird would that look? Besides, this it houses all the sensors for the car’s autonomous driving system – more on that in bit.

The new Grand Sphere looks even wilder at the back. The slim brakelights, sloping rear roofline, and fin-like rear pillars have nothing in common with today’s A8.

Audi has kitted-out the Grand Sphere with level 4 self-driving tech. This means it has all the sensors and clever software it needs to drive itself on motorways and in heavy traffic.

But, the Grand Sphere has another trick up its sleeve… It can retract the steering wheel and pedals and hide them behind the dashboard when it’s in autonomous mode to give you more room to stretch out.

The front doors open normally but the back doors open, well, backwards. There’s no pillar in the middle either, so you climb in through this massive full-width opening.

Look closely at the side widows and you’ll see each one has two separate bits of glass connected by a chrome strip. This makes it look as though the car has really small, sleek windows from the outside, but the extra bit of glass lets in more light to make sure the interior still feels nice and airy.

Most luxury cars have a few mod-cons for a chauffeur in the front, but they save all the ultra-plush features for the boss sitting in the back. The Grand Sphere is a bit different. After all, this car can drive itself, so you don’t need a chauffeur!

There’s even a drinks cooler built into the centre console and a houseplant between the front seats. Probably to balance your feng shui – or something…

Instead of a huge screen, the Grand Sphere has built-in projectors that turn the whole wooden dashboard into a massive widescreen display. But that’s not all. You don’t control this with old-fashioned buttons or a fiddly touchpad. Oh no – you control it with your eyes. Yes, really.

It has built-in eye tracking and hand tracking, so you can control all the car’s features without touching a single button. A bit like Tom Cruise in Minority Report.

Even cooler are the climate control (pardon the pun.) These look like ordinary physical knobs, but they’re also gesture-controlled. So, you just twist your hand near the knob, and it uses built-in motors to automatically turn itself to adjust the temperature. It’s like you’re using the force.

The Audi Grand Sphere comes with a massive 120kWh battery – that’s even bigger than the huge 108kWh battery you get in a top-spec Mercedes EQS. Audi reckons it gives the Grand Sphere almost 470 miles of range – that’s about 10 fewer miles than the EQS can manage.

Get all the latest Mercedes EQS info

Audi has fitted the Grand Sphere with 2 electric motors. that give it four-wheel drive and produce a whopping 720hp and a 960Nm of torque. That’s about 75hp and 130Nm more than you get in an RS e-tron GT.

As a result, it’ll do 0-60mph in around 4 seconds. That’s quick enough to spill your champagne, but it is a few tenths slower than the 571hp Audi S8, which manages the 0-60mph sprint in 3.8 seconds.

The Grand Sphere also comes with rear-wheel steering – just like the Mercedes EQS – so it should be fairly easy to park. Well, for a car that’s more than 5.3 meters long, anyway…

Audi has given the Grand Sphere its latest 800V electrical system that’s compatible with 270kW public fast-chargers – just like the e-tron GT.

This means you can recharge the Grand Sphere from 5% to 80% full in less than 25 minutes and boost its range by almost 190 miles in just 10 minutes.

Fancy getting your hands on this car? Well, put your checkbook away – you can’t buy the Audi Grand Sphere Concept yet. But, Audi will make a production version that’ll go on sale alongside the normal petrol, diesel and hybrid A8 in around 2025.

So, how much is this new EV going to cost? Well, it’ll be an alternative to the Mercedes EQS, so it could cost about the same. If Audi decides to make a 2-wheel-drive version, it could come with an £80-£90,000 price tag but higher-spec cars with 4-wheel drive and a bigger battery will probably set you back more than £100,000.

Can’t wait for a new A8-sized EV to go on sale? Check out the top 10 best electric cars or compare the latest Audi deals available through carwow.