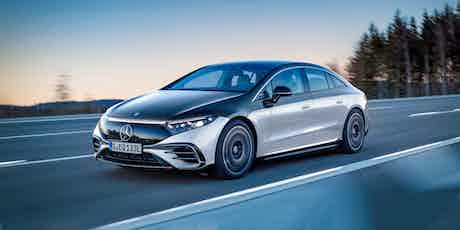 The new Mercedes EQS costs from £99,995 and is on sale now. Read on for full details.

You can think of this all-new luxury car as an electric version of the latest S-Class, or as an alternative to cars such as the Tesla Model S, the Porsche Taycan and the Audi e-tron GT.

You can order a Mercedes EQS now, with prices starting from £99,995.

That’ll grab you an AMG Line car, with standard styling bits including 20-inch alloy wheels, AMG Line-specific body styling and a panoramic sunroof. You’ll get full leather upholstery inside, along with heated front and rear seats, plus a 12.3-inch digital driver’s display alongside a 12.8-inch infotainment system.

You can upgrade to AMG Line Premium for an additional £7,995, which brings extra goodies like Mercedes’ new Hyperscreen setup, 21-inch alloy wheels, a 360-degree camera and a Burmester surround sound system.

Next up, for £7,000 more, is AMG Line Premium Plus. This adds a heads-up display, remote parking and a gesture-controller assistant for the infotainment system.

If you want something a bit plusher, the EQS Luxury can be had for £7,000 over AMG Line. This does away with the sporty bodykit, though adds 22-inch alloy wheels, wood trim to the interior and unique upholstery, along with more comf0rt-oriented seats.

For more luxury, you can have Exclusive Luxury which brings a massage function for the seats and Nappa leather amongst other bits, costing £7,000 on top of Luxury trim. Slap another £3,995 onto the price and you can get the Rear Luxury Lounge package, bringing electrically adjustable rear seats with climate control and an Android tablet for those in the back to take over the infotainment.

The Mercedes EQS looks totally different from any other Mercedes saloon on sale. Rather than a long flat bonnet and a rounded roof line like an S-Class, the whole car looks like one great big curve – especially from the side, and the pop-out door handles really add to this smooth look.

At the front, the EQS doesn’t have a huge chrome grille like most Mercedes saloons. Instead, it gets a blanked-off trim piece like the EQC and EQA electric cars. The full-width daytime running light looks just like the one on those cars, too, and the intakes in the front bumper are pretty similar to the ones on an S-Class.

At the back, the brakelights stretch the whole width of the car – just like one a Porsche Taycan or an Audi e-tron GT. You get 20-inch wheels as standard in the UK, but you can pay extra for wheels up to 22 inches in size, and there’s also an optional two-tone paintjob if you really want your EQS to stand out.

The new Mercedes EQS has one of the most futuristic interiors of any new cars – especially with that massive infotainment screen (but more on that later.)

The new EQS is a smidge longer and a bit taller than the S-Class, too. So it should feel even roomier inside – even more so with the optional panoramic glass roof fitted. You can choose from a range of eight different colour combinations for the interior, and there are 190 customisable LEDs dotted around the cabin for you to play with.

There’s a load of different materials options too, including some backlit glossy plastic and unvarnished wood that looks like it’s been nicked from a posh yacht. There are also 2 different steering wheel designs, depending on whether you get a Luxury-trim EQS or an AMG Line car.

You can get a couple of different seat designs with up to 10 different massage programs to help you relax, and there’s an optional Premium Plus pack that comes with automatic doors that open when you walk up to the car and close when you press the brake. Looks like Jeeves can take the day off.

This sounds like something Darth Vader uses to watch the footy, but it’s actually a huge piece of glass with 3 built-in screens – the driver gets a 12-inch screen to themselves, there’s a huge 18-inch touchscreen in the middle, and the front-seat passenger also gets a 12-inch display.

The system has the latest version of Mercedes’ infotainment system, so it comes with all the usual smartphone mirroring and satellite navigation features and it has an upgraded ‘Hey Mercedes’ feature that can understand 27 languages even remember your voice patterns.

Another cool feature is the new face-recognition system that tell who’s driving and load their personal settings automatically. It can also detect if you’re trying to look at the passenger’s display, and automatically dim it to make it less distracting. Speaking of passenger’s displays, you can also get the EQS with a pair of 12-inch screens in the back, just like in the S-Class. So nobody has to feel left out…

The entry-level car is called the Mercedes EQS 450+. This comes with one motor at the back that drives the rear wheels. It makes 333hp and does 0-60mph in 6.2 seconds, so it’s fairly quick. Although that’s still about 0.8 seconds slower than a rear-wheel-drive Porsche Taycan.

There’s also a quicker model called the EQS 580 4Matic. This four-wheel drive version comes with 2 electric motors that produce 523hp, which is enough to do 0-60mph in 4.3 seconds. That’s slightly slower than a Porsche Taycan 4S, which will do 0-60mph in four seconds flat.

Mercedes is also cooking up an AMG performance version of the EQS. And that’ll have 761hp – exactly the same as a Porsche Taycan Turbo S.

The Mercedes EQS will come with a 108kWh battery as standard, which gives it up to 478 miles of range. That’s a lot more than the 290 miles of range you get from a Porsche Taycan 4S. But it’s less than the 520 miles claimed of range of the Tesla Model S Plaid Plus.

Mercedes has confirmed that it’ll also launch a cheaper version of the EQS with a slightly smaller 90kWh battery, which should do about 400 miles on a charge.

Whichever battery you choose, you’ll be able to charge the EQS using super-fast 200kW public chargers that can add 186 miles of range in just 15 minutes – if you can find one.

Charging at home will take a lot longer. The standard 11kW onboard charger will let you completely charge the batteries in about 10 hours, but you can pay extra for a 22kW onboard charger that’ll do it in 5 hours.

The new Mercedes EQS is packed with tech that’ll make it super relaxing to drive. It comes with air suspension as standard – just like the S-Class – so it should soak up bumps effortlessly. It can even remember the location of speed bumps and steep driveways using GPS, and it’ll automatically raise the car up next time you drive over them.

There’s also plenty of sound-deadening packed into the new EQS, so it should be impressively quiet to travel in. The car’s Burmester stereo can even work like a giant pair of noise-cancelling headphones to further muffle wind and tyre noise.

But driving round in total silence can be a bit weird, so Mercedes has given you a couple of custom soundtracks to choose from. There’s an ambient noise program called ‘Silver Waves’ and a sci-fi inspired one called ‘Vivid Flux’. If you want something more exciting, you can download the ‘Roaring Pulse’ soundtrack that’s inspired by weather and erupting volcanos – apparently.

You can also get the EQS with the same driver-assistance systems as the new S-Class. In that car, these can accelerate, steer, brake and even change lanes for you. Also like the S-Class, the new EQS will be able to drive itself in specially-built car parks, without anyone in the driver’s seat. Although, there aren’t any of these in Europe yet…

If you’re a bit worried about lending your new electric Mercedes to someone else, you can turn on the new ‘beginner’ mode that limits the top speed to 75mph. There’s also a valet mode with a 50mph speed limit. This also locks all your settings so no-one can mess around with them.

As standard the system will only turn the back wheels by up to 4.5 degrees, even though it’s mechanically capable of turning them by 10 degrees… The reason? Cash. If you want the full 10 degree capability, which reduces the turning circle by 1 meter, you have to pay Mercedes for an over-the-air software update.

Can’t wait for this new car to go on sale? Compare the best Mercedes deals available through carwow or check out the top 10 electric cars on sale now.