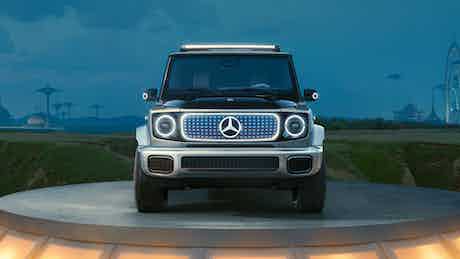 This Mercedes EQG Concept is your first look at the upcoming all-electric version of the Mercedes G-Class – a new electric off-roader that’s set to go on sale in 2025.

This is the new Mercedes Concept EQG, which gives you a first look at an upcoming electric G-Class electric car.

There’s not a huge amount of difference between the current Mercedes G-Class and the Concept EQG, which shows it’s likely the existing 4×4 was designed with an EV version on the cards from the very start.

The round headlights remain, but the front grille is gone. Instead, you get a deep black panel that houses an illuminated Mercedes badge.

22-inch alloy wheels are fitted to this concept — and will probably be an option on the road car — though expect Mercedes to also offer some smaller wheels that suit larger, chunkier off-road tyres.

You’ll spot an LED light strip at the top of the roof too, designed to be a modern take on the high-beam auxiliary lights you’ll see on plenty of full-bore off-roaders. There are also light-up bars on each door instead of the standard car’s black rubber strips.

There’s no spare wheel at the back, rather a box designed to keep all your charging cables neatly organised.

The Mercedes EQG concept uses a similar cabin to the standard car. This would suggest that the finished car might not come with a vast widescreen ‘Hyperscreen’ infotainment system like in the EQS and EQE, or that Mercedes isn’t ready to share how it plans to fit a colossal 56-inch display into the G-Class just yet…

Mercedes has said that the EQG concept uses four electric motors, a redesigned rear axle and a new two-speed gearbox to make it just as capable when off-roading as the standard G-Class.

Mercedes hasn’t said whether this system will be available in the finished car, but Markus Schäfer (Mercedes’ Chief Operating Officer) confirmed that the EQG won’t just use motors and batteries lifted from the current EQS.

He also dropped hints that the new EQG would be capable of ‘turning on the spot’, suggesting new drive modes could allow the left- and right-hand wheels to turn in opposite directions, letting the car slew in a circle like a bulldozer.

It’s likely the new electric off-roader will come with similar 200kW charging technology as that car, allowing you to boost its range by around 190 miles in as little as 15 minutes.

It’s expected that a road-going version of the Mercedes Concept EQG will go on sale in around 2025.

If you’re weighing up buying one, you’ll likely need more than £100,000 to park one on your drive.