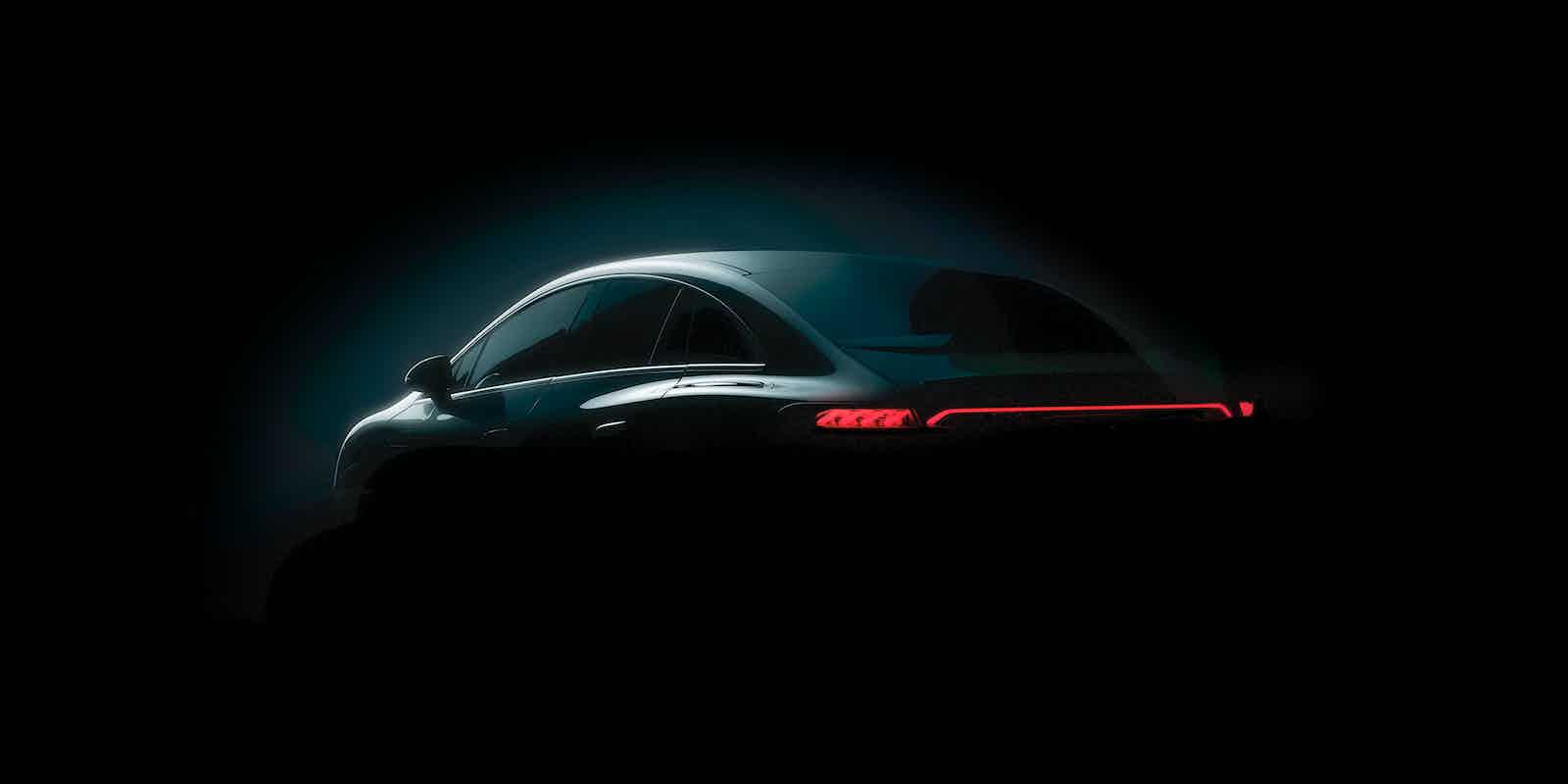 The new Mercedes EQE will be revealed at the IAA Munich motor show as an electric alternative to the E-Class. These new teases show you what to expect from this smaller version of the new Mercedes EQS luxury saloon.

Mercedes has confirmed that the new EQE electric car will be revealed in September 2021 at the IAA Munich motor show. Two new teaser images show you what to expect from this new Tesla Model S alternative when it arrives in 2022.

These new teaser images show that the new EQE will look similar to the larger EQS saloon thanks to its equally swoopy roofline, curvy body and full-width brake light design.

These spyshots show a prototype Mercedes EQE being tested on public roads. Although the finer points of the car’s design are covered, you can easily make out this new car’s curvy silhouette, broad headlights and a smattering of air intakes and vents in the front bumper.

A new interior teaser image (above) reveals the new EQE’s cabin in great details. It’s clear the new electric car will be offered with a version of the same ‘Hyperscreen’ infotainment system you get in the larger EQS. This consists of a vast glass panel on the dashboard with integrated screens in the centre and behind the steering wheel.

It’s likely that this triple-screen system will be an optional extra, however. Entry-level versions of the EQE will most likely come with a dual screen-setup, just like in the standard Mercedes EQS (shown below.)

As with many other electric cars, the EQE looks to have quite a long-wheelbase (the distance between the car’s front and rear axles), which should in theory translate to good amounts of interior space. The car’s angled roofline may compromise rear-seat headroom a bit, though.

There are no official claims regarding the EQE’s battery size. Judging by its size and the modular architecture most new electric vehicles use, the 90kWh and 108kWh batteries from the EQS should be offered here as well.

Similarly, there’s no official word yet on how far you’ll be able to drive between charges, but the EQE is bound to have up to 350-500 miles of range, depending on the spec. As a reference, the EQS is capable of up to 478 miles when equipped with the largest 108kWh battery.

It’s quite likely the EQE will inherit the EQS’ rapid charging feature, too – meaning it will be compatible with powerful 200kW charging points that can put a lot of energy into the battery very quickly. Depending on battery size, these can boost your range by 186 miles in just 15 minutes.

What happens when you drive an electric car until it completely runs out of power? Find out in the video below.

Expect a full charge to take around 10 hours as standard using an 11kW onboard charger, but Mercedes will likely offer a faster 22kw onboard-charger option that’ll be finished in five hours.

Entry-level models are likely to only be available as rear-wheel-drive cars, with the dual-motor all-wheel-drive setup reserved for more powerful versions. The rear-wheel-drive EQS makes 333hp and it is highly likely we will see this motor in the EQE lineup, too.

The EQS with the twin-motor setup produces 523hp and is capable of a 0-60mph run of just 4.3 seconds. The lighter EQE may be even quicker thanks to its lighter weight.

While nothing official has been confirmed, it’s highly likely there’ll be a selection of high-performance electric AMG variants to take on cars like the Tesla Model S Plaid. The images here reveal a rather large set of front brake discs which will likely be reserved for a future Mercedes-AMG EQE model.

For the extra outlay you can expect far superior performance and plenty of additional features on the EQE. It should match up well to the pricing of the upcoming Audi A6 e-tron and even undercut the Tesla Model S which costs almost £10,000 more.

Read our Mercedes EQS price, specs and release date story for more information on the upcoming EQE’s bigger brother or see our list of the best electric cars on sale.