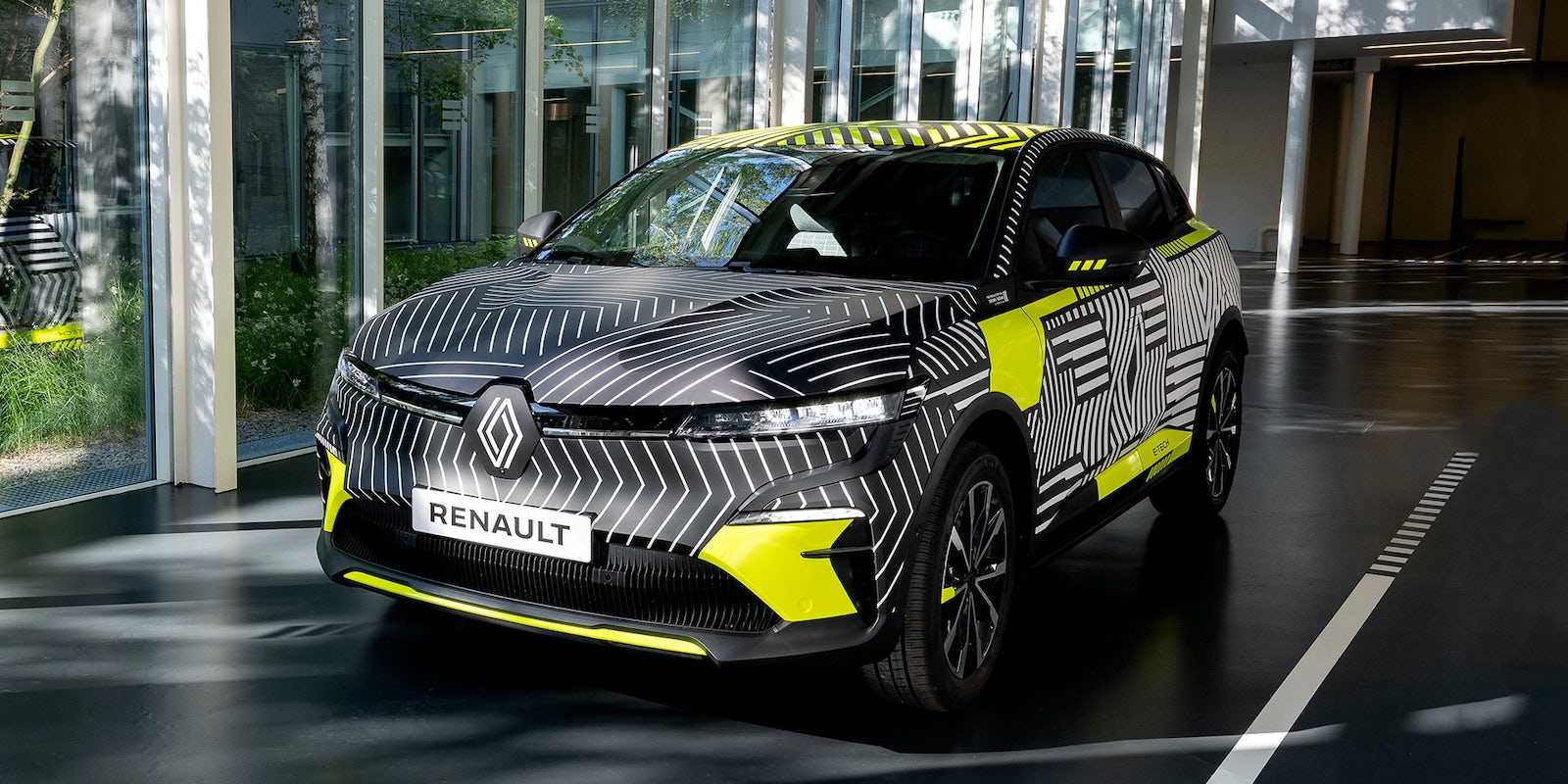 More details on the new Renault Megane E electric car – due to arrive in 2022 – have been revealed. Read on for all the info.

Renault has finally released some more images of its upcoming Megane E-Tech Electric hatchback. The full-body wrap does little to camouflage the lines of this new EV, also called the MeganE (pronounced Megane E). With no conventional petrol or diesel engines planned for this new model, the Megane E will be an alternative to the likes of the Volkswagen ID3 and Citroen e-C4.

The car in these photos isn’t a finished example, but it gives you a good idea of what the new Renault Megane E will look like.

The similarities between it and the eVision concept car (above) are clear, the Megane E retains a narrow full-length headlight design while the bottom half of the front bumper has more prominent vertical strakes. The rear arches are not quite so flared as on the eVision and the side mirrors look to be conventional units instead of the concept’s rear-facing cameras.

The new Megane E’s rear retains much of what made the eVision so striking.

The long taillight design now has a slim white stripe running along its length and the steeply raked roofline and minimal rear window area are also remarkably similar.

The Megane E will be offered with a 60kWh battery pack which should give it up to 280 miles of range. These are the same figures as were claimed for the eVision, but you can expect a range of different battery sizes to be offered once the Megane E goes on sale.

The Megane eVision concept was also said to be compatible with 130kW charging points, giving it the capability to go from 0% to 80% charged in approximately 30 minutes. While nothing official has been announced just yet, it is quite likely that the production Megane E will also be offered with this fast-charging capability.

The production Megane E will be offered with a 217hp electric motor, sending all the power to the front wheels, which should give it sprightly performance. There’s a chance more powerful versions will be introduced later.

With the current petrol-powered Megane RS and Trophy models both producing 296hp, it would be great to see an EV version with this sort of power on offer.

As with the exterior, the interior of the upcoming Renault Megane E will be completely redesigned. The trend with most new electric cars these days is to offer a minimalist design with two or three digital screens and the bare minimum of physical buttons.

As the teaser pics (below) show, the traditional analogue instrument display has been replaced by a fully digital readout, and there’s also a large touchscreen on the dashboard.

So pared back is the interior, it seems, there doesn’t even appear to be a physical drive selector lever on the centre console (even the Renault Zoe electric supermini has one of those). There does seem to be a row of what appear to be shortcut keys along the bottom of the touchscreen, however.

Details on how spacious the interior will be are not available as yet, although the dimensions of the Renault Megane E and current combustion-powered car seem broadly similar. This should result in some more interior space thanks to the flatter floor afforded by the electric drive system.

Renault has already confirmed the new Megane will go on sale in 2022 – meaning there’s a chance the production-ready car will be revealed before the end of 2021.

Pricing details aren’t available yet, but expect the all-electric Renault Megane E to slot in somewhere below the top-spec RS 300 Megane which sells for £33,895. This would also place it in line with EV alternatives like the Nissan Leaf and VW ID3.