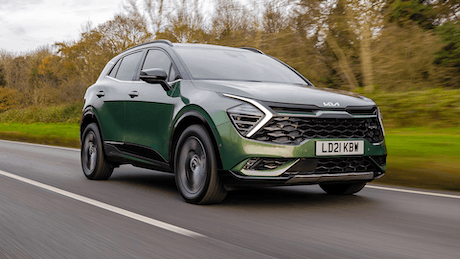 The new Kia Sportage will be on sale later this month, with prices starting at £26,745.

It’ll square up to alternatives such as the Skoda Karoq, Volkswagen Tiguan and Ford Kuga when it reaches UK roads early in 2022.

Orders for the new Kia Sportage will be taken from December 15, with prices starting at £26,745.

That’ll get you a ‘2’ model of the SUV, with standard equipment including 17-inch alloy wheels, LED headlights and a suite of safety assistance tech.

Building on that is GT-Line, available from £29,745. This adds a sportier body kit, 19-inch alloy wheels, suede leather upholstery and a 12.3-inch touchscreen infotainment system.

Next in the Sportage range is ‘3’ trim. This takes ‘2’ up a level with 18-inch alloy wheels and adaptive cruise control, while also bringing in the infotainment system seen on sporty GT-Line models.

Following on from that is the Sportage ‘4’, adding a panoramic sunroof, an upgraded Harman Kardon surround-sound stereo system, adaptive headlights and a 360-degree camera. Prices for this variant kick-off at £36,445.

Sitting at the very top of the Kia Sportage range is GT-Line S. This takes everything from ‘4’, adds the GT-Line body kit and 19-inch alloy wheels plus 10-way adjustable seats. You’ll get ventilation for those, too. The Kia Sportage GT-Line S costs from £38,445.

This is the first time Kia has designed a Sportage specifically for Europe and the UK. Besides a few visual tweaks, the European model is slightly smaller than the version that’ll go on sale around the world.

The old Sportage had a grille inspired by a tiger’s nose – well, according to Kia at least… The new car looks arguably less like a wild animal, but it’s still plenty sporty for a family SUV. The first thing you’ll notice are probably those pointy daytime running lights, followed by the heavily creased doors and angular side skirts with flashes of black and chrome trim.

This new Sportage is also the first to come with the option of a contrasting black roof.

From the back, the new Kia Sportage’s brake lights take inspiration from the Kia EV6 electric car – especially the brake lights with their angular design and downturned edges.

The new Kia Sportage gets a much more modern-looking interior than the outgoing model. Instead of that car’s relatively small touchscreen, you get a 12.3-inch central screen that links up to a new 12.3-inch digital driver’s display – much like the dual-screen setups you find in many Mercedes cars.

You get very few physical buttons in the new Sportage’s interior – as is common these days – so it may be a little tricky to operate some of the system’s more detailed menus while you’re driving.

The new Kia Sportage has 591 litres of boot space. That’s a significant improvement on the outgoing car’s 503-litre capacity. Flip the back seats down and you can carry 1,780 litres of family odds-and-ends.

The new Kia Sportage comes with a choice of mild-hybrid, full-hybrid and plug-in hybrid technology working alongside both petrol and diesel engines.

Mild-hybrid petrol models come with 150hp or 180hp, while full-hybrid cars produce 230hp. Plug-in versions are the most powerful – they produce a total of 265hp.

You can also get a 1.6-litre diesel engine producing 115hp or 136hp. The 136hp version is also offered with mild-hybrid tech to help reduce emissions and boost fuel efficiency.

You can get the new Kia Sportage with a six-speed manual gearbox or a seven-speed dual-clutch automatic – although the availability of each depends on which engine you choose.

Check out the latest current Kia Sportage deals available on the current car or compare the top 10 best SUVs currently available through carwow.