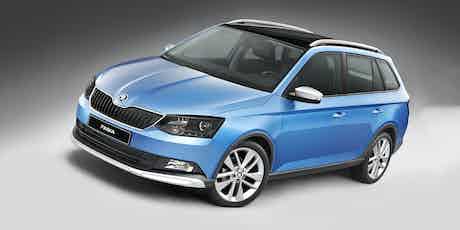 Skoda has launched an off-road inspired Scout trim for the Fabia Estate, but it’s 50/50 whether it’ll make it to the UK…

Skoda’s range in Europe has gotten a boost with the addition of a new Scout trim to its popular Fabia supermini. Based on the practical Fabia Estate, the Scout has an off-road inspired appearance package featuring distinctive plastic cladding and new alloy wheel designs.

In the UK, Skoda already offers the standard Fabia Estate alongside its larger Octavia Estate and Superb Estate models. The Octavia is already available in Scout trim and features similar styling to the Fabia but with the addition of a four-wheel-drive system to keep you going in all weathers.

A spokesman for the Czech company confirmed it was unlikely this model will make it to the UK, apparently down to a lack of projected demand in this market. On the continent, where road and weather conditions are worse than we see in the UK, there may be more demand for this model. Nevertheless, Skoda says it can bring the model over should demand change, so fans may want to start petitioning their local dealer now.

Interestingly, the previous generation Fabia Estate was offered over here in Scout trim from 2010 until earlier this year, but sales figures never mirrored the success of the larger Octavia Scout so it’s not entirely surprising the brand has decided to hold fire on the second-generation model.

The standard Fabia Estate is one of the few supermini based estate cars on sale in the UK and its only direct competitors are its more stylish cousin, the SEAT Ibiza ST and the bargain Dacia Logan MCV. In terms of boot space, however, it competes with cars from one or two classes above so has found fans among those after the most space for the minimum cash.

In a market increasingly focused on crossover and SUV models, it might seem like Skoda is missing a trick by not bringing the Fabia Scout here, especially given the lack of a Nissan Juke competitor in its line-up. But, with several new crossovers in development, including a compact model based on the MQB platform, it seems unlikely that Skoda will continue to neglect this popular area of the market for much longer.

Looking for an off-road ready Skoda?

If you’re interested in looking at Skoda’s existing rugged models, take a look at the Skoda Octavia Scout in our car configurator or try speccing up the popular Skoda Yeti. Alternatively take a look at the standard Skoda Fabia Estate or check out our car chooser if you’re still struggling to pick your next car.