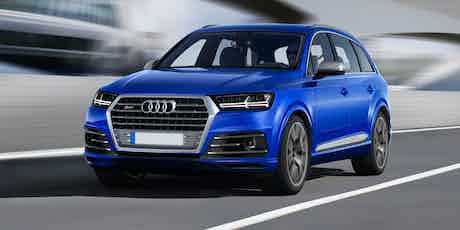 Audi has lifted the lid on the SQ7, a high-performance version of the Q7 SUV featuring new electric turbocharger technology

Audi has revealed the SQ7 – a high-performance version of the German brand’s largest SUV, the Q7. The most significant changes come in the form of a new electric air-compression system that aims to reduce turbo lag and increase efficiency. We take an in-depth look at the full details…

If you’re after a fast SUV but can’t wait for the SQ7, our fastest SUVs and 4x4s article shows you the quickest currently on sale. If a standard model is more than fast enough for you, use our Audi Q7 car configurator to get a great deal on you next new car.

The exterior of the Audi SQ7 is almost identical to the standard car apart for a few subtle red ‘S’ badges. The familiar metal hexagonal grille remains, as do the distinctive LED headlights. The turn signals and daytime running lights have been combined to form a single component within the headlight pod. This arrow shaped visual cue is repeated by the large LED rear lights, too.

The SQ7 rides on large 20-inch alloy wheels but, if this isn’t imposing enough for you, Audi offers even larger 22-inch alternatives. Quad-exhaust tips are fitted as standard and come finished in ‘twilight grey matte’ to compliment the 12 available paint colours.

The SQ7 boasts the largest interior in its segment and is offered with either five or seven seats. Customers can choose to upgrade to a full-leather interior and add an Alcantara headlining, contrast stitching and velour floor mats as part of the ‘Kodiak Brown’ Audi design pack. Extensive LED lighting options and a selection of aluminium, carbon and copper trim pieces allow high levels of personalisation in the SQ7 interior.

The SQ7’s interior can be specified with the brilliant Audi Virtual Cockpit – a 12.3-inch digital display in the instrument cluster that replaces the traditional dials and relays important information, such as sat-nav directions, to the driver. Grey and white analogue instruments with SQ7 badging are offered as standard.

A Bang and Olufsen sound system can be fitted in conjunction with Audi’s MMI infotainment package that includes 23 speakers with a total output of 1,920 watts. The Audi connect package enables passengers to connect their smartphones to an on-board wifi hotspot.

Turbocharged engines use the force of hot exhaust gases to spin a turbine that, in turn, forces cold air back into the engine. This high pressure air contributes to more efficient combustion, producing both greater power and better fuel economy.

This increase in power often comes at the price of a slight delay in responsiveness under full throttle, however. The SQ7 features a new electric air compression system that forces cold air into the engine as soon as you hit the accelerator helping to reduce this delay (often called ‘lag’) and increase efficiency. Audi claims that the 435hp 4.0-litre V8 diesel engine can accelerate the SQ7 to 62mph from rest in just 4.8 seconds, yet return up to 31.8mpg.

Audi has announced that an entry level SQ7 should cost just less than £70,000 when it goes on sale in the UK. This is a significant £5,000 increase over the most expensive current Q7 but Audi claims the high performance ‘S’ model comes with a host of new equipment, itself worth approximately £7,700.

Although the SQ7 will go on sale in Europe in spring 2016, a UK release date has not been revealed yet. We expect UK dealers to take orders before the summer, however, and see the first cars on the road before the end of the year.

Save money on your new Audi SUV

If you’re after a spacious and speedy SUV but can’t wait for the SQ7, our Audi Q7 car configurator can help you get a great deal on your new car. If you’re not sure what to buy, our handy car chooser tool is here to help.