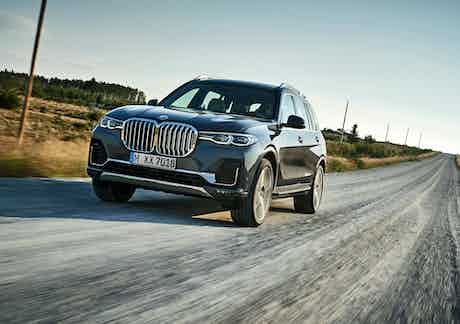 BMW has revealed its flagship SUV – the BMW X7 – its first true alternative to the all-conquering Range Rover. Keep reading for the car’s price, specs and release date

The BMW X7 has been revealed and we have all the information you need to know about the company’s flagship SUV. Keep reading for the car’s full price, specs and release date.

Whether you like the BMW X7’s styling is a matter of personal opinion, but no one can say it doesn’t have huge road presence – half the battle with a car like this. With its massive grille, tall ride height, slabbed sides and huge wheels – up to 22-inches in size – the X7 is less of an SUV and more of a BMW-badged juggernaut. All models come with LED headlights as standard while laser lights with a 600m range are optional.

Around the sides, you’ll notice the X7’s rear doors are bigger than the fronts to aid rear-seat access and you also get chrome surrounds for the windows, chrome roof rails and chrome running boards to help you climb inside. Round the back, you’ll find LED rear lights with a chrome bar that runs between them just like on BMW’s top-of-the-range saloon – the 7 Series.

You’ll find the BMW X7 interior is just as flash as the outside.

All models come with extended and soft Merino leather which is used to cover the dashboard and doors as well as the seats – you can choose from five colours.

Comfort front seats with a full range of electrical adjustment come as standard and both the front and middle row of seats are heated. The parts of the interior that aren’t covered in leather are instead plastered with cold-to-the-touch metal and huge swathes of expensive looking trim pieces.

Options from BMW’s bespoke Individual line include two-tone leather in Ivory White and Midnight Blue (rather you than us) and a selection of wood trims. You can also have the starter button, the top of the gear shifter and volume knob finished in glass, but only if you don’t mind throwing some more dosh BMW’s way.

M Sport models add the sporty touches that’ll be familiar to anyone who has studied a BMW configurator – they include an M Sport steering wheel, dark headliner, M Sport specific pedals and M Sport specific trims.

Thankfully, the X7’s most striking feature – its huge panoramic sunroof – comes as standard and it has three separate sections that can be opened all in one or individually.

The ‘catchily’ titled Panorama glass roof Sky Lounge, meanwhile, sprinkles said glass with bright-shining LEDs that are meant to resemble the sky at night. A trick the headlining in a Roll Royce has been pulling off for years, of course.

The BMW X7 gets the latest BMW infotainment system that comes complete with a huge 12.3-inch central infotainment screen and another 12.3-inch screen behind the steering wheel. It can be controlled either directly through the central touchscreen or via BMW’s trusty iDrive control that’s located on the centre console between the two front seats.

Like Mercedes’ MBUX operating system, the X7’s infotainment understands spoken commands – bursting into life when you say ‘Hey BMW’. Should you wish, you can chat to it as if its a person, so saying ‘Hey BMW, I’m sleepy’ will see it respond by sending cool air into the cabin and cranking up the stereo to stop you falling asleep.

And, if speaking to your BMW sounds like a step too far, you have one more option – gesture controls. Sadly, they tend to be the least reliable, but swiping at the air in front of the windscreen – in a variety of movements – can (sometimes, if you’re lucky) do things like turn up the stereo or shuffle between tiles on the car’s infotainment.

Wireless phone charging comes fitted as standard and you get three stereo systems to choose from. Even the standard ten-speaker stereo will be fairly decent, but the optional 16-speaker Harman Kardon unit will be even better. If you want to do the job properly though, you’ll need to spend even more by going for the Bowers & Wilkins Diamond Surround System which has 20 speakers and a pneumatic-drill rivalling 1,500W output.

The BMW X7 is the first BMW to offer true seven-seater capability with space for seven adults and a third row of seats that offer a surprising amount of elbow room.

If you can make do with six seats though, BMW offers a 2+2+2 option with a pair of ‘captain’s’ chairs in the middle that have their own separate armrests and offer the same level of electrical adjustment as the seats up front. Whether you go for the six or the seven-seat configuration, the middle row can slide forwards and backwards by as much as 14.5mm so you can balance knee room between the middle and back row of seats.

Even with all its seats in use, the BMW X7 has a 326-litre boot that’s slightly bigger than you get in an Audi Q7 with seven people aboard. BMW doesn’t quote a capacity for the X7’s boot with only five seats in use, but it’ll be big, and with all the back seats folded away the car’s total capacity sits at 2,120 litres – which again is slightly more than is offered in the Audi Q7.

Loading the BMW is helped by the car’s standard air suspension which crouches 40mm to help you slide in heavy luggage, and you also get a splitting tailgate that makes the load bay completely flat and gives you somewhere to sit when you’re taking of your wellies.

That said, if you want to be able to open and close the boot by waggling your foot under the bumper, you’ll need the optional Comfort Access pack.

The BMW X7 comes with 21-inch alloy wheels, air suspension and the soft-close doors, you’d usually find in a posh limo, as standard. M Sport models add a body kit and uprated brakes, along with sporty interior touches, while the top-of-the-line M50d gets gangster-esque 22-inch wheels, an M Sport differential so you can, er, slide your massive X7 out of bends and a stereo from Harman Kardon.

If you want to add to the standard kit list, though, BMW will happily oblige, options include ventilated front seats, and a front seat massage function. You can also have electrically operated rear blinds, while the Ambient Air Package lets you infuse the air through the ventilation system with your choice of eight scents. Finally, you can have optional front cupholders that either cool or heat your drinks.

The BMW X7 will be available with a choice of three engines all with six cylinders and a 3.0-litre capacity.

The range kicks off with the 265hp xDrive 30d diesel that gets from 0-62mph in seven seconds and returns fuel economy of 43.5mpg. Not too shabby for what equates to a four-wheel drive castle. Next up is the xDrive 40i petrol with 340hp a 0-62mph time of 6.1 seconds and fuel economy of 32.5mpg.

But, If you want to have your cake and eat it, you’ll need the M50d diesel – its three turbos launch the X7 from 0-62mph in just 5.4 seconds yet it can still return an admirable 40.4 mpg. Try and get that from your 5.0-litre supercharged Range Rover.

The BMW X7 comes with four-wheel drive as standard, but in normal driving, it can send power to the rear wheels only to give it the sporty push-not-pull feeling that you get from one of the firm’s saloons.

All X7s come with comfy air suspension that lowers the car automatically by 20mm when your speed exceeds 86mph to aid stability. By the same token, the suspension can be raised by up to 40mm to stop the car bottoming out when off-roading.

There are of course a sea of options that are designed to make the X7 even better to drive. Active Integral Steering is one example; it can turn the back wheels either in the same direction as the fronts – to aid high-speed stability in bends – or in the opposite direction at low speeds to give the car a tighter turning circle. Another option is the Executive Drive Pro system, which cuts out body roll in bends and also smooths out bumps.

There’s even an option to choose if you plan to take your X7 off-road – called the Off-road Package. It gives you four presets – xSnow, xSand, xGravel and xRocks – which lets you setup the X7 for the corresponding terrains.

The BMW X7 gets Cruise Control and automatic emergency braking that can detect people, cyclists and cars as standard. For a full suite of autonomous driving aids, though, you need to go for the Driving Assistant Professional pack which can brake and accelerate the car for you – and even bring it to a complete halt for up to 30 seconds in stop-go traffic before moving off automatically. The system can deal with steering the car through road works and can change lanes automatically when you indicate. It can even take evasive manoeuvres when it calculates that the car’s automatic brakes won’t be able to stop the X7 to avoid an imminent accident.

Bookmark this page to read a full review of the BMW X7 in the coming months.