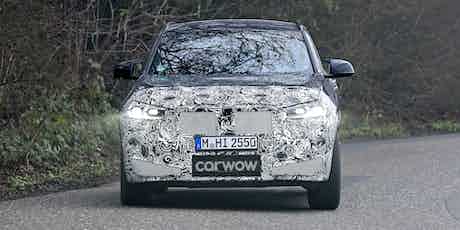 The new BMW X4 has been spotted testing alongside a sporty X4 M version before both updated cars go on sale in 2021.

An updated BMW X4 is on the way. This coupe-SUV alternative to the likes of the new Audi Q5 Sportback and recently updated Mercedes GLC Coupe isn’t expected to change significantly, but you can bet it’ll come with a subtle redesign, new tech and more efficient engine options. Here’s everything you need to know so far about the new BMW X4.

As these spy shots show, the new BMW X4 isn’t going to get a massive redesign as part of this update. Instead, the changes appear to be more limited to minor tweaks, such as a set of new L-shaped daytime-running lights and some altered air intakes in the bumper. Although, the camouflage cladding makes these harder to spot.

The rest of the design has been mostly untouched, so there’s nothing to worry about if you’re already a fan of the way the BMW X4 looks. Even the front grille looks like it’ll be the same size as before (unlike on the recently released 4 Series Coupe.)

Like the exterior, the new BMW X4’s interior won’t look hugely different from the current car’s cabin. You can expect the biggest change to be a revised infotainment system with BMW’s latest iDrive software – the same system that comes in the recently updated 5 Series.

The new BMW X4 will likely keep the current car’s range of petrol and diesel engines. You can expect the most popular model to come with a 2.0-litre four-cylinder diesel engine (with either 190hp or 286hp, depending on which version you go for), and there’ll also be 340hp diesel and 360hp petrol engines for the sportier M40d and M40i models respectively.

As part of the update, these engines are also expected to be given new mild-hybrid systems. Unlike a regular hybrid or plug-in hybrid, these mild-hybrid engines won’t be able to cover any miles on electric power alone, though the extra electrical assistance from their small motor and battery pack should help improve fuel economy a bit.

It’s not just the regular BMW X4 that’s getting a mid-life update – the more powerful X4 M is due to get a nip and tuck, too. Changes appear to be just as subtle as on the standard X4, with new daytime running lights being the most obvious features.

If the recent facelift for the BMW M5 is anything to go on, expect a slightly larger grille surround and a mildly more aggressive bumper redesign, too.

The rest of the X4 M looks very similar to the current car, including its larger alloy wheels, deeper front bumper than the normal X4, quad exhaust pipes and a small lip spoiler on the boot lid.

It’s likely the 510hp 3.0-litre twin-turbocharged six-cylinder petrol engine will be carried over unchanged, along with its all-wheel drive system and eight-speed automatic gearbox.

Order books for the facelifted BMW X4 and X4 M are expected to open during summer 2021, with the first deliveries expected later in the year. Prices likely won’t rise too much over the current car – meaning the regular BMW X4 should start from around £46,000, or from around £85,000 if you go for the X4 M version.

If you can’t wait for this new model to go on sale, compare the latest BMW X4 offers or check out the best SUVs currently on sale.