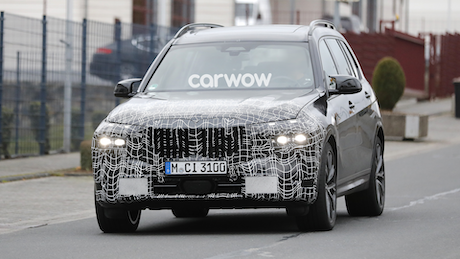 Fresh photos have surfaced of the updated BMW X7 luxury SUV. As well as refreshed styling, it may also get some updated engines. Read on for the full details.

A new version of the BMW X7 is in the works – these photos show prototypes being tested spotted before the finished car is revealed, possibly in early 2022.

The X7 is BMW’s largest SUV, sitting above the X5 in the line-up and providing an alternative to cars such as the Mercedes GLS and the Range Rover. This new model is set to receive a few visual upgrades along with some new infotainment tech when it goes on sale in around 2022.

This prototype BMW X7  is only wearing minimal camouflage, so don’t expect any radical changes compared with the current car. What you can make out is that the divisive front grille remains unchanged.

The big news up-front is what appears to be the addition of some new headlights. They appear to lower down in the bumper than before, with a stacked two-piece design that may resemble the upcoming BMW 7 Series.

Around the back, there are no discernible differences to note.  Some refreshed bumpers are a safe bet, but you’ll have to wait for the disguise to come off before you can see those.

No images have surfaced of the new X7’s interior, but there’s a strong chance BMW could fit the updated SUV with the same brand-new iDrive 8 infotainment system as you get in the recently revealed iX and i4 electric cars.

These come with a dual-screen system that features a 12.3-inch digital driver’s display and a 14.9-inch central touchscreen, melded together into one vast widescreen.

It’s unlikely the X7’s cabin will look dramatically different from the current car, however. It’ll still feel very posh and be spacious enough to carry seven people — with the option of two ‘captain’s chairs’ in the middle row (ideal if you prefer to be chauffeured around rather than drive yourself.)

The current BMW X7 uses a range of large and powerful engines, including six-cylinder petrols and diesels, along with a range-topping V8 petrol version. There are some changes to this range in the pipeline to keep up with consumer demands.

The M50d, a quad turbo diesel engine, will probably be dropped. In its place, there could be a plug-in hybrid M45e model.

The new BMW X7 will likely cost slightly more than the outgoing model across the range. You’ll need to set aside from around £80,000 for an entry-level car, and more than £100,000 for a top-spec model with a V8 engine.

Can’t wait for this new model to go on sale? Compare the latest BMW X7 deals available today or check out the top 10 seven-seat SUVs on sale now.