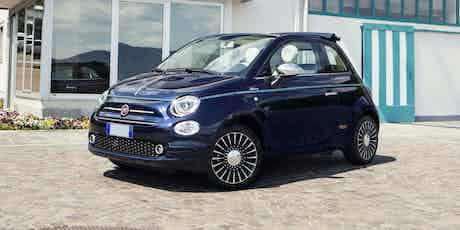 Fiat has collaborated with luxury yacht builder Riva to create a special edition 500 supermini. Read on for full details…

Fiat has announced it will build a number of special edition 500 hatchbacks and 500C convertibles in a collaboration with the yacht manufacturer Riva. These cars will receive a number of styling upgrades to the exterior and in the cabin – read on to find out exactly what’s new…

In many ways, Fiat and Riva couldn’t be more different. Fiat made its name building cheap and cheerful cars for the Italian masses, while Riva became the last word in handcrafted luxury by manufacturing opulent speedboats unmatched in terms of performance and exclusivity. Their collaboration has resulted in a supermini with numerous nautical-themed touches that should appeal to buyers after a premium city car with a distinctly Italian flavour.

The exterior is painted in exclusive Sera Blue paintwork, not available on any other Fiat model. All 500C convertibles receive a new blue fabric roof while hatchback versions come with a panoramic glass roof as standard. An aquamarine blue pinstripe – inspired by a similar feature that marks out Riva speedboats – runs around the entire car’s body and its new 16-inch alloy wheels come with a subtle two-tone silver and blue finish.

The interior features many new mahogany pieces with maple inlays, such as the gear lever and dashboard, while the seats and steering wheel come trimmed in ivory leather as standard. Modifications extend to the floor mats and boot carpet that now feature wooden inserts and new blue contrast stitching.

The 500 Riva comes fitted with LED daytime running lights, a seven-inch touchscreen infotainment system and a DAB digital radio with Bluetooth connectivity as standard. Customers will be able to upgrade to an improved sat-nav system with 3D mapping as an optional extra.

Fiat hasn’t announced how much the 500 Riva will cost, but it has confirmed this new special edition model will go on sale at the end of August 2016. It will be offered with either a 1.2-litre engine producing 69hp, or a more powerful TwinAir unit with either 85hp or 105hp.