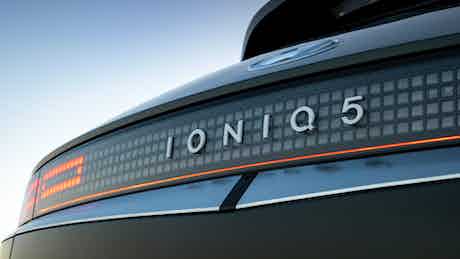 The Hyundai Ioniq 5 has received some tweaks to improve charging times, as well as getting some new tech. Read on for all you need to know.

The Hyundai Ioniq 5 electric car is getting some updates for 2022, including an upgraded battery with faster charging times.

This alternative to the Skoda Enyaq and Kia EV6 will also be getting some new tech, including virtual door mirrors.

The biggest update to the Hyundai Ioniq 5 will be the addition of a new 77.4kWh battery option.

The biggest change for the new Hyundai Ioniq 5 is its upgraded battery that promises faster charging times.

Hyundai has fitted the car with a new battery conditioning system. This can maintain the battery at an optimal temperature for charging when you’re on the move so you can top up as quickly as possible. The system engages as soon as you enter a charging point into the sat nav.

The interior of the new Hyundai Ioniq 5 is expected to stay more or less the same as the current car. This is no bad thing – the current car has a spacious, modern-looking cabin with plenty of natural light and loads of futuristic touches, such as the widescreen infotainment system.

There are some additions on the tech front however, most notably the new cameras that replace the door mirrors. These will be available as an option and feature two screens in the car which relay images from cameras mounted outside.

If you want to see how similar mirrors fare in a real-world road test, check out this Audi e-tron review.

Don’t expect to see any major changes in terms of design. The current car still looks fresh with its pixel-style front and rear lights and bold angular body panels.

The rear-facing cameras that optionally replace door mirrors will make the car look even more futuristic when they arrive.

The updated Hyundai Ioniq 5 is due to go on sale in the spring. While prices haven’t been confirmed yet, it may see a small increase over the current car. Somewhere around £39,000 seems likely, meaning it won’t be eligible for the government’s plug-in car grant.

Can’t wait for the new Hyundai Ioniq 5? Check out deals on the current car, or compare the latest electric cars to find the ideal model for you.