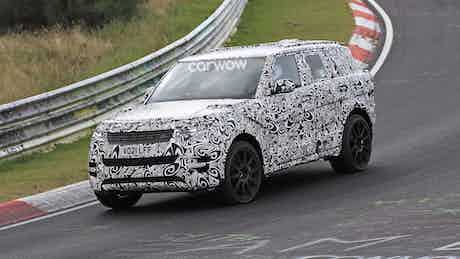 The next-generation Range Rover Sport has been spotted testing on public roads. Read on for more on this exciting upcoming SUV, as well as in the high-performance SVR version.

The current Range Rover Sport is the second-best-selling SUV in the manufacturer’s lineup after the smaller Evoque, making this all-new car a crucial model for the brand. A high-performance SVR has been spotted too, which should follow shortly after the new Range Rover Sport arrives in 2022.

With hybrid engines a key focus and, potentially, even a fully electric model in the works, the new Range Rover Sport will be an alternative to the likes of the Mercedes-Benz GLE, BMW X5, Jaguar I-Pace and Audi e-tron. Don’t worry though, the SVR will still come with an old-school V8.

These look similar to the prototype versions of the standard Range Rover Sport that have already been spotted but the keen-eyed among you should spot a few different details.

Separating this prototype from the standard cars is a real grille rather than a temporary mesh covering.

What hints at this being an SVR are the more aggressive intake cutouts in the camouflage covering the front bumper, along with a set of huge alloy wheels wrapped in thick tyres.

At the back of the car, it’s easy to see a quad-exit exhaust setup — a dead giveaway for the V8-powered model.

It’s likely the SVR will use a BMW-sourced twin-turbo V8 engine linked up to a mild-hybrid system — a 25hp increase on the current car. Power should be in the region of 600hp and will continue to be sent through an all-wheel-drive system. As a result, expect a 0-60mph time of under 4.5 seconds.

There is a lot of swirly camouflage disguising the new Range Rover Sport’s body panels but the family resemblance with the current model is clear to see.

The front end features a similar grille and headlight design – these may be temporary items for now – while the body panels retain that chunky, upright stance of the current car.

The door handles aren’t the flush-fitting items as used on the Velar, although they do look slimmer than before.

Those odd little discs on the roof and small protrusions behind the front wheel arches may be sensors and cameras for the UK’s connected car project that both Bosch (which has its logo on the sides of the car) and Land Rover are collaborating on.

The rear is also more of an evolutionary design, with the current car’s signature split tailgate visible beneath the wrap.

No official images of the Range Rover Sport’s cabin have been seen yet but you can expect a thoroughly updated cabin.

The latest Pivi Pro infotainment system, as featured on the recently updated Jaguar F-Pace, is almost certain to feature here, too.

The upcoming Range Rover Sport will have a range of mild-hybrid and hybrid engines as well as fully electric options in due course.

The electric model will be designed in partnership with BMW, and Jaguar Land Rover plans to have its first all-electric Land Rover model by 2024. The larger petrol-powered models may also use BMW’s current range of 4.4-litre turbocharged V8 engines.

The Range Rover Sport should make its official reveal in 2022. Pricing has not been announced yet, but the current range starts off at £64,685 for the D250 diesel and tops out at £101,920 for the 575hp P575 supercharged V8. Prices should see a nominal increase across the board when the new model goes on sale in late 2022.

Cant wait for this new car to go on sale? Check out the latest Range Rover Sport deals available through carwow or compare the top-10 SUVs on sale now.