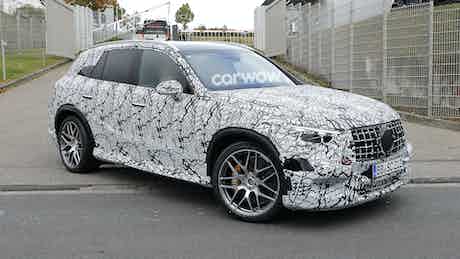 The new Mercedes AMG GLC 63 has been spotted testing in heavy camouflage, along with the less powerful AMG GLC 43 model

The new Mercedes-AMG GLC 63 has been spotted testing. This high-performance SUV will likely ditch the old model’s twin-turbo 4.0-litre V8 engine in favour of a turbocharged four-cylinder hybrid setup shared with the upcoming AMG C63.

Read on for more information about this all-new alternative to the likes of the BMW X3 M, Alfa Romeo Stelvio Quadrifoglio and Jaguar F-Pace SVR.

The new Mercedes GLC has already been spotted in prototype form, but these new pictures give you your first look at the more powerful AMG variants.

Under the wrap, you’ll see the wider arches on the AMG GLC 63 to accommodate larger wheels.

Around the back, you’ll see classic AMG oblong quad tail pipes, as well as a lower rear bumper with some trim that mimicks the shape of a rear diffuser.

The Mercedes AMG GLC 43 has also been spotted, with similar styling upgrades to the AMG GLC 63. The only discernible difference is a set of round, rather than square, exhaust pipes.

Nothing has been revealed yet about the engine options for the new Mercedes AMG GLC 63 but it’s highly likely it will borrow the new four-cylinder engine from the upcoming AMG C63 saloon.

This means it’ll almost certainly come with a 2.0 four-cylinder turbocharged engine, boosted by an electric motor to produce around 450hp.

Read our story on the new Mercedes AMG C63

If the AMG C63 is anything to go by, the new AMG GLC 63 will more than likely have four-wheel drive and a nine-speed automatic gearbox as well.

The AMG GLC 43 is expected to have the same engine but with around 400hp, possibly as a result of a less performance-oriented hybrid system.

No images have come out yet of the new Mercedes AMG GLC 63’s interior yet, but it’ll likely be quite similar to that you’ll find in the C-Class saloon.

This means a contemporary look and plenty of tech. It’s predicted the AMG GLC 63 will have the same portrait style screen as the C-Class.

It’ll be a while before Mercedes officially reveals the new AMG GLC 63, possibly towards the end of 2022.

Can’t wait for these new AMG GLC models to go on sale? Check out the best SUVs on sale now or compare the latest Mercedes offers available through carwow.