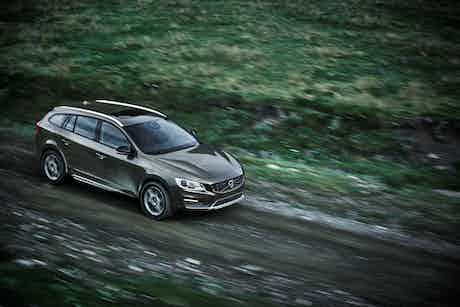 Volvo’s love for the softest of soft-roaders continues with the release of its newest model. The V60 Cross Country is based on the V60 estate and aims to compete against models such as the A4 Allroad.

Volvo have made a few changes which they claim produce “a sporty, connected yet comfortable driving experience with the freedom to explore new horizons.”

What that means to you and me is that Volvo has given the car a generally more SUV-inspired style. The ride height has been increased by 65mm over the standard car, giving more ground clearance and a more commanding view of the road ahead. The front and rear bumpers feature skid plates designed to protect delicate under-body components from rocks, dirt and (most likely) high kerbs, while wheel arch extensions finished in black plastic give the sides a more rugged look.

Stylish 18-inch alloy wheels are wrapped in high-profile tyres (meaning the sidewall of the tyres are larger than usual), which not only adds to the chunky off-road feel, but Volvo believes they will also improve the ride quality and reduce road noise. A clever torque vectoring system – which can accelerate and brake individual wheels to maximise grip during cornering – will also feature.

Three engines will be on offer in the Cross Country. The entry-level D3 model is powered by a 2.0-litre turbo diesel, which transmits 136hp to the front wheels. Another front-wheel-drive version features a more potent version of the same four-cylinder unit, producing 181hp.

In the V60, the base D3 model returns CO2 figures of 119g/km so we predict that the Cross Country will return marginally higher figures. For those who may actually take the car off road, a four-wheel-drive model – featuring a 187hp five-cylinder diesel under the bonnet – will also be available, though it’s old and inefficient.

Prices have yet to be revealed, but the basic D3 version of the V60 estate starts at £23,395. Based on the price hike Volvo sticks on their its Cross Country models, expect to pay about £2,500 more. Given Volvo’s reputation, it will be reasonable to expect excellent safety ratings and generous equipment levels as standard. Order books will open in the first quarter of 2015, and deliveries will start in June.