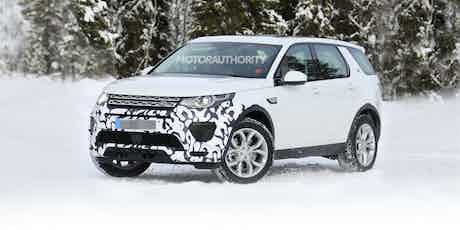 A new high-performance Land Rover Discovery SVR has been spotted testing. Read our complete guide for everything you need to know…

A new high performance Land Rover Discovery Sport seems to be undergoing winter testing in images courtesy of Motor Authority. It could be a quicker ‘SVR’ version of the Discovery Sport, built to rival the upcoming BMW X3 M40i and Mercedes AMG GLC 43. Read our complete guide for what we know so far…

If you can’t wait for a faster version, our Land Rover Discovery Sport configurator can help you get a great deal on your new car. Not sold on this model? Check out our list of the fastest SUVs on sale.

The prototype test car has been fitted with a camouflaged front bumper to help disguise its new enlarged air intakes. The silver trim on the lower bumper have been removed, possibly to increase airflow to the engine or to help differentiate it from slower models in the range.

The rest of the prototype’s bodywork looks the same as a standard Discovery Sport but, when an SVR model finally goes on sale, we expect a number of exterior features, such as side skirts and alloy wheels, to have been redesigned.

No images have emerged of the new SVR’s interior but we don’t expect it to differ significantly from the standard Discovery Sport. Its practical seven-seat layout and sizeable load bay will hopefully remain unchanged.

Reports suggest the SVR could come with a turbocharged 2.0-litre four-cylinder engine that will also see service in the Jaguar XE. In this application, it’s reported to produce 240hp but we expect this figure to rise for a sporty Land Rover SVR model – potentially as high as 300hp.

No official dates or figures have been revealed but it’s likely the Discovery Sport SVR will go on sale in 2018, priced to compete with the likes of BMW and Mercedes at between £45,000 and £50,000.

Save money on your new Land Rover

If you can’t wait for the launch of the SVR model, our Land Rover Discovery Sport configurator can help find you the perfect deal on the current car. If you’re not sure what to buy, read our list of the best SUVs, or check out our car chooser tool.