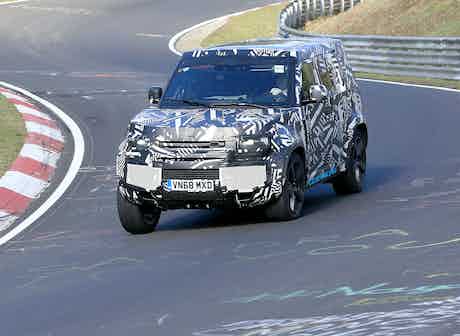 The Land Rover Defender has been spied again, this time undertaking high-speed testing. Find out all you need to know about this latest sighting, below.

Germany’s high-speed Nurburgring race circuit might not seem like the ideal place to be testing an out-and-out off-roader but it shows that Land Rover is serious about making the new Defender handle as well on-road as it does off-road. Owners of the old Defender can attest to the fact that it felt like a fish out of water on windy country roads with a genuine feeling that it might fall over if you tackled a bend too quickly.

As you can see from the pics, the new car isn’t immune from lean, but it manages to stay more upright than the old model and it could well be offered with adjustable dampers that’ll let you stiffen the suspension in high-speed corners. In the case of these pics though, it’s more likely that Land Rover’s engineers are calibrating the car’s stability control system to ensure it behaves with Angela Merkel-like predictability at the limit.

This is the latest in a line of Defender spy photographs – you’ve already seen the car outside the company’s UK headquarters, off-roading in the US and caught a glimpse of its supposed new interior. The car is set to come packed full of off-roading tech that’ll make it unstoppable in pretty much any condition, but it should also be much easier to live with than the iconic (you could say archaic) old model.

To keep up with all the latest on the new Defender, sign up to the carwow newsletter at the top of your screen.