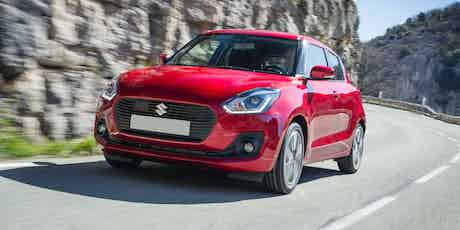 The all-new Suzuki Swift boasts sharp new looks, a lighter chassis and the option of a new mild hybrid system to boost fuel economy. Thankfully, these modifications haven’t blunted the Swift’s fantastic handling – it’s still one of the most fun-to-drive superminis on sale.

Is it as fun to drive as the old car?

Absolutely. A new lightweight chassis makes it just as entertaining as the old, class-leading, model. Its steering is sharp and nicely weighted while body roll is all but non-existent – even in tight corners.

The ride is a little unforgiving at times – large potholes and speed bumps can send unpleasant jolts through the cabin – but its stiff setup helps the Swift devour mini roundabouts and twisty country roads with a fever that’ll give the class-leading Ford Fiesta a few sleepless nights.

Its large windows and tall windscreen offer impressive visibility but, combined with a rather upright driving position and high seat bases, they slightly dull your sense of speed. Thankfully, the turbocharged 1.0-litre Boosterjet engine we drove was more than happy to compensate with a surprisingly rorty exhaust note at high revs.

What about engines? I’ve heard there’s a hybrid…

Top-spec 1.0-litre SZ5 models come with Suzuki’s new SHVS mild-hybrid system as standard. It uses a compact battery pack and electric motor to assist the engine when you plant your right foot. It not only boosts performance, but helps you use a little less fuel, too.

It sounds complicated but, working quietly in the background, fuel economy is boosted by around 4mpg and CO2 emissions are trimmed to 97g/km – crucially below the magic 100g/km mark. Unfortunately, the Swift’s compact dimensions mean there just isn’t enough room under the bonnet to offer this trick system on cars fitted with the new six-speed automatic gearbox.

Conventional 1.0-litre models return an impressive 61.4mpg while the slower 1.2-litre petrol carried over from the old car equals the hybrid’s 65.7mpg figure. Pick a speedy automatic or a version fitted with all-wheel drive, and you’ll have to make do with 56.5 and 62.8mpg, respectively.

The new Swift’s longer wheelbase and wider body mean there’s far more room inside than the old car. Tall passengers shouldn’t grumble too loudly if you stick them on the back seat and headroom is excellent all round.

The cabin’s not just spacious, it looks good, too. Smart dials, a slick leather-trimmed steering wheel and plenty of glossy trim pieces lend it a far more upmarket appearance than the old car’s drab, uninspiring interior.

All but entry-level SZ3 cars come fitted with a seven-inch touchscreen infotainment system, while top-spec SZ5 models feature Android Auto, Apple CarPlay and MirrorLink connectivity. It’s a little clumsy to use at times but handy on-screen icons help you quickly access key functions without jumping into a sea of confusing menus.

Sounds good, but is it practical?

Mostly, yes. The new car’s 265-litre boot is 54-litres larger than the old model’s and there are two easy-to-reach Isofix points fitted as standard to the rear seats. All four doors open nearly perpendicularly to the body, too, so jumping in the back or retrieving a child seat is a breeze.

Unfortunately, clever cubby holes are few and far between. Each door features a small bottle holder but the glovebox is slim and there’s nowhere to safely stow a pair of sunglasses. The centre console does feature two decent-sized cupholders and a tray for your phone, however.

Should I buy one?

The new Swift really is one of the best superminis out there. It serves up a truly tempting combination of good looks, a roomy cabin and terrific handling that won’t cost the earth to run. If you’re in the market for a do-it-all supermini, it’ll be hard to look past this plucky Japanese contender when it goes on sale in June 2017.