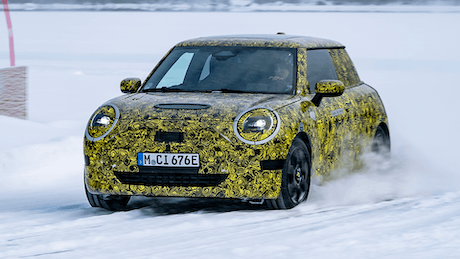 The Mini 3-Door is set to go all-electric for this all-new generation. Read on for full details.

Official pictures of the Mini 3-Door hatchback undergoing testing have been released, and it’ll be sold exclusively as an electric car.

This alternative to the Audi A1 and Fiat 500 will have funky new styling and new infotainment tech as well.

The Mini’s main USP has always been its love-it or hate-it retro styling. If you’re a fan of the current car, you’re bound to like this new version.

The round headlights up front are pretty familiar but they have a slightly updated design with some new LED running lights.

Check out the best hatchbacks on sale

Being electric, it doesn’t need to feed lots of air through a large grille to help cool a hot petrol engine. As a result, this prototype only has a very slim air intake in the front bumper.

The side profile is instantly recognisable as a Mini, with the same wheel-at-each-corner stance as its predecessors. You can also see the flush-mounted door handles.

The rear end is where you can see the biggest change. The lines across the boot lid show the outline of some angular new taillights, although they are well disguised on this test car.

This new Mini 3-Door will be offered exclusively as an electric car. As a result, expect the ‘Electric’ name from the current model to be dropped in favour of more conventional naming for its motor options.

The current car has around 145 miles of range, so expect the new model to improve upon this. An electric John Cooper Works performance model is also in the pipeline, and it’s likely a range of variants will be introduced over the 3-Door’s lifespan.

There are no images of the new Mini’s interior yet, however it’s likely to be an evolution of the current car’s design.

It’s safe to assume that you’ll be seeing the big central circular screen for the infotainment, as well as retro toggle switches and plenty of personalisation options.

The new Mini 3-Door is expected to debut in 2023, with deliveries starting at the end of the year.

Pricing hasn’t been revealed yet, however it’s a safe bet that it will cost more than the current car. Somewhere around £20,000 for the standard Hatch and £30,000 for the electric model.

Can’t wait for the new Mini? Check out deals on the current car with carwow. Not sure which is the right model for you? Tap the button below to get help choosing your ideal car.