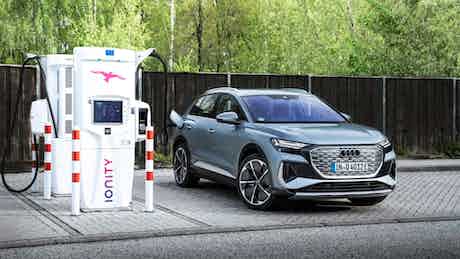 The Audi Q4 e-tron has received some updates to improve charging times, and there’s some new tech on board as well.

The Audi Q4 e-tron has received some minor updates to keep it up-to-date in line with alternatives such as the BMW iX3 and Mercedes EQC.

These include some new tech on board and faster charging times for models with larger batteries.

The main change to the Audi Q4 e-tron for 2022 is that the models with the largest 77kWh batteries can now charge more quickly than before.

The more powerful Q4 50 e-tron can do the same charge in 36 minutes compared to 38 minutes in the previous model.

The actual battery range remains the same for all Audi Q4 e-tron models, meaning you’ll get between 211 and 323 miles of range depending on which model you choose.

While the interior design of the Audi Q4 e-tron will remain the same, there is some new technology on board. You can now get the Amazon Alexa virtual assistant.

This allows the driver to manage their calendar and shopping lists, as well as control compatible smart home devices using voice commands.

The infotainment screen in the Q4 e-tron is now slightly larger at 11.6-inches. The built-in sat-nav can also now update charging stops en-route depending on the traffic situation.

The exterior design of the Audi Q4 e-tron won’t be changing, which isn’t necessarily a bad thing.

It’s always been a smart-looking thing, with its slim LED lights and full-width rear light bar. The coupe-style Q4 e-tron Sportback will also remain the same.

It’s worth noting as well that the Q4 e-tron isn’t available for the Government’s plug-in car grant, because the starting price is too high.

Looking for a great deal on an electric car? You can compare offers now through carwow. Or, if you’re not sure which model is right for you, tap the button below to get help.