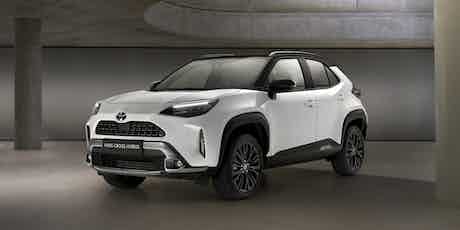 Dynamic and Premiere Edition versions of the upcoming Toyota Yaris Cross have been revealed ahead of sales starting in May. Read on for full details.

New trims for the upcoming Toyota Yaris Cross have been revealed, ahead of the SUV going on sale in May. Set to take on established alternatives like the Ford Puma and Volkswagen T-Cross, expect pricing to be north of the £20,000 mark.

A new trim for the Toyota Yaris Cross has been shown off, called Dynamic. Set to join the previously-shown Excel version car when sales start in May, the Dynamic trim aims to give the Yaris Cross a bit more of a rugged, pseudo-off roader look.

It gets some extra bumper cladding at the front and rear, plus some silver roof rails and grey-painted 18-inch alloy wheels. Hop inside and you’re met with some piano black trim pieces, faux leather seats and a little bit of gold detailing across the instrument panel. You get a leather steering wheel as well.

If you want more still, the Premiere Edition cranks Dynamic up to 11. It gets its own 18-inch wheel design, an electrically-operated tailgate with a foot sensor plus a head-up display.

The full equipment list for both Dynamic and Premiere Edition, as well as the already-revealed Excel version of the Toyota Yaris Cross will be detailed before sales start in May. You’ll only be able to grab a Premier Edition car in the first 12 months of production, though.

The new Toyota Yaris Cross takes the new Yaris’ dinky city car shape and applies plenty of SUV styling cues. The bluff front end and downturned grille, for example, look very similar to those on the larger Toyota RAV4 while the contrasting, squared-off wheel arches are a hallmark of many chunky SUVs.

The vertical air vents under the headlights and upright reflectors in the rear bumper all serve to make the new Toyota Yaris Cross look taller than the likes of the Kia Xceed and Renault Captur, while the contrasting black roof stops it looking too top-heavy. It’s not what you’d call conventionally pretty, but it’s eyecatching nonetheless – and isn’t that the point of an SUV?

Unlike the exterior, the new Toyota Yaris Cross’ interior looks very similar to that in the standard Yaris. There’s a similar touchscreen infotainment display high up on the dashboard above the heating and ventilation controls, and the air vents are neatly integrated into a curved section of the upper dashboard that runs the width of the cabin.

The two circular speedometer and rev-counter dials you get in the standard Yaris hatchback have been replaced by a large semi-circular speedometer with a central digital display flanked by two additional readouts. These are all illuminated in blue – as in many hybrid cars.

You won’t find any bright colourful trim such as the optional dashboard inserts in a VW T-Cross – instead the Yaris Cross’ interior is a more staid combination of greys, blacks and blues with a couple of metal-effect silver trims to brighten up the place.

The new Toyota Yaris Cross comes with a 1.5-litre petrol engine that’s paired with a compact electric motor. This hybrid system allows it to run using both the engine and motor, just the motor or just the engine – depending on which driving mode you’re in and the manner in which you’re driving.

When working together, the engine and motor produce 116hp and, as standard, drive the front wheels through an automatic gearbox. You’ll be able to get the Yaris Cross with four-wheel-drive instead, but expect these versions to be slightly less economical.

On the subject of which, Toyota hasn’t announced any official fuel economy figures for the new Yaris Cross, but it has said that front-wheel-drive versions will emit fewer than 90g/km of CO2, and four-wheel-drive models fewer than 100g/km of CO2.

Toyota hasn’t confirmed how much the new Yaris Cross will cost, but you can expect it to set you back somewhere between the price of a Yaris Hybrid and a C-HR hybrid. As a result, entry-level Excel cars could set you back between £20,000 and £25,000, while top-spec Premier Edition could cost more than £30,000.

Sales for those who register interest early with briefly open in May, with wider sales starting in September. First deliveries should start later in 2021.

Why not see how much you can save on the standard car by visiting our Toyota Yaris deals page? Alternatively, read our in-depth Toyota Yaris review for more information.