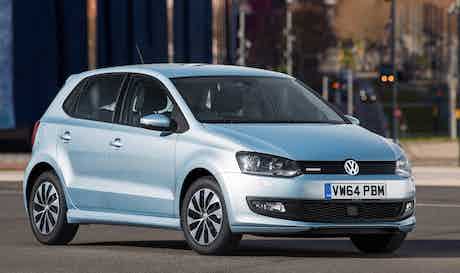 The first petrol-powered car in VW’s fuel-sipping BlueMotion range will cost from £14,730 – find out what you get for your money

This is the 2015 Polo BlueMotion – and it’s a bit different from the usual cars in Volkswagen’s super-frugal BlueMotion range. It’s not a diesel, for a start.

A new 1.0-litre turbocharged three-cylinder petrol engine sits under the bonnet, which is capable of returning a claimed 68.9mpg, and CO2 emissions low enough that mean that is free to tax. Despite the frugal nature of the engine, performance hasn’t been sacrificed: producing 94hp between 5,000 and 5,500rpm, the BlueMotion will cover the 0-62mph dash in 10.5 seconds – perfectly reasonable for the class, and enough to keep up with motorway traffic.

What else is new?

It’s set apart from the rest of the Polo range by some subtle styling tweaks to the bumpers, the side skirts and the rear spoiler. Unique 15-inch alloy wheels are wrapped in low rolling resistance tyres to help achieve that fuel economy figure.

As is to be expected from the latest Polo, equipment levels are impressive. The BlueMotion is based on the S trim level, and is equipped as standard with a colour touch screen, DAB digital radio, air conditioning and cruise control. A system known as Think Blue Trainer offers hints and tips on how to drive more economically on your daily commute.

In terms of petrol superminis, there is little else that will offer similar fuel economy levels with the Polo’s sense of class. The slightly smaller Peugeot 108/Citroen C1/Toyota Aygo trio offer similar levels, but they are from a class below in terms of size (and some would argue quality, too.) Therefore the closest competitors are the Ford Fiesta 1.0-litre EcoBoost and Mazda 2 1.5 Skyactiv, which both offer a claimed figures of over 60mpg.

How much does it cost?