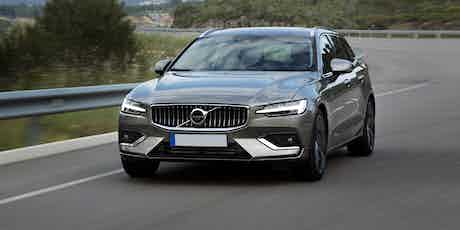 A fast Volvo V60, badged the R, is said to be in the pipeline

The new Volvo V60 has barely gone on sale and already the company is testing a prototype fast version. While the car’s powertrain is still unknown, expect the V60 R to produce around 400hp when it’s revealed later in 2018.

Volvo’s interiors are known for being calming and luxurious, but the V60 R will add sporty touches to this cocktail. Supportive bucket seats will be fitted to stop you sliding about through fast corners, and you’ll also be treated to contrasting stitching, a sportier steering wheel and a digital driver’s display that’ll show the most important driving information.

You’ll still get a nine-inch portrait touchscreen infotainment system that’s lovely to use, if a bit fidgety on the move. All the physical switches feel solid and premium, the 10-speaker stereo negates the need for the expensive optional ones and smartphone mirroring is included as standard.

The V60 R will hopefully channel the spirit of Volvo’s previous white hot estates, the 850 R and T5, both of which has a cult following with Volvo fans. Early signs suggest the new model might live up to its predecessors. As yet, it’s still a mystery what’ll be under the bonnet, but it could use the T8 petrol-hybrid combination used in the most expensive XC60 and XC90 SUVs. Alternatively, it’s equally likely to use a high-powered petrol engine. Either way, it’s expected that the R will produce around 400hp – even more than the previous-generation V60 Polestar limited edition model.

Bigger brakes will help the big Swede stop sooner, and lower, firmer suspension will be fitted to improve the V60’s handling and keep it level through corners. Expect four-wheel drive to come as standard to help keep control of all that power.

Volvo are undertaking what might be the last few development tests on the V60 R, so it’s expected to be revealed in the autumn of 2018. If you want one of these fast, spacious cars on your driveway, it’s likely to cost you somewhere in the region of £50,000 to £55,000 before options.