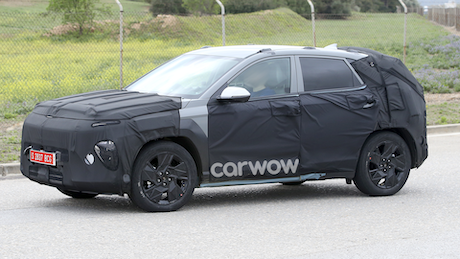 An all-new Hyundai Kona is on the horizon, and it’s set to be bigger than ever. Read on for everything you need to know about this new family SUV…

Development of the new Hyundai Kona is well underway, and the all-new model has been snapped on a test drive before it makes its public debut.

This small family SUV looks to have grown in size over the current car and will continue to serve as an alternative to cars like the Nissan Juke and Volkswagen T-Roc when it goes on sale, likely in 2023.

The new Hyundai Kona is heavily covered up for now, so design details are tricky to spot. It does look as though it’ll grow in size over the current car, however.

The new Hyundai Bayon takes the role of the smallest SUV in the brand’s lineup. This new Hyundai Kona is set to be larger and more practical than that model but will be slightly smaller than the recently revealed Hyundai Tucson SUV.

The cutouts in the camouflage suggest the new Hyundai Kona will have a similar split headlight design to the current car. It’s a bit harder to see how the rear will look, however.

This test car also seems to have a set of alloy wheels that could make production but it’s too soon to be sure.

Compare the best SUVs on carwow

The new, larger Hyundai Kona is set to come with a roomier interior than ever. As for the design, it may share the wide dashboard vents from the new Hyundai Bayon, and it should come with a new infotainment system as well.

Don’t bet against it having a pair of 10.25-inch screens – a central touchscreen and a separate digital driver’s display.

The new car – if indeed larger – could have more boot space than today’s Kona, which can carry 374 litres of luggage.

You can expect the new Hyundai Kona to come with a similar engine lineup to the current car. This would include petrol options as well as hybrid options.

A Hyundai Kona Electric is expected to return as well. This could nab tech from the new Niro SUV made by Hyundai’s sister company, Kia. That car comes with a 64.8kWh battery that gives it a claimed range of 287 miles.

Expect to see the new Hyundai Kona sometime in 2023. Pricing will likely rise over the current model, which starts at £21,615.

Looking to change your car for a Hyundai Kona? It’s easy through carwow. Get a great deal on your new car, and sell your current one for what it’s really worth through our network of trusted dealers.