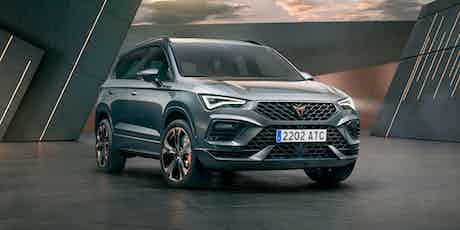 Remember the days when eggs were eggs and Cupras were SEATs? Well, they’re gone and they’re not coming back. Turns out Cupra works as a standalone brand – the firm sold 10,000 cars in 2019, 72% up year on year, and Cupras accounted for 15% of all Ateca sales, so it turns out badge manufacturing does work.

Like George Clooney approaching his 60s, the new Cupra Ateca has more wrinkles but somehow looks even better. Upfront you get sleek new headlights, a revised grille and new bumpers that give the Ateca a busier face. There are also new 17-inch alloy wheels and a new Dark Camouflage green paint option.

Cupra had made subtle tweaks to the Ateca’s dimensions to make it look more aggressive. It’s 2mm shorter than before and both the front and rear track have been increased to make the car sit squatter on the road. That said, the car’s width and wheelbase remain the same, so there’s no increase in interior space.

The new Cupra Ateca comes with the same 300hp, 2.0-litre turbocharged petrol engine as before. That means you get from 0-62mph in 4.9 seconds – that’s quicker than a Honda Civic Type, in an SUV – and hits 153mph flat out. That’ll do Cupra, that’ll do.

The Ateca’s owes its impressive acceleration to its standard four-wheel drive system, which can send power to the rear wheels the minute the front tyres break traction. It works using a multi-disc clutch that’s located just ahead of the rear axle for improved weight distribution.

Changes made to the Cupra Ateca’s interior are subtle, but you’ll spot a few like the car’s new steering wheel. It has bronze trim and two buttons for engine stop-start and to cycle through the modes on the car’s drive select. You also get a new infotainment screen that loses the conventional buttons fitted to the old system and four USBC charge points in total.

New for this Cupra Ateca is its built-in voice activation system. It’s activated when you say “hola hola” but thankfully immediately reverts back to English from there. It’s been designed to understand natural speech but is unlikely to be as good as using the voice activation on your phone via the Cupra’s standard Apple CarPlay and Android Auto.

The new Cupra Ateca can now link up with SEAT’s Connect App. That means you can do things like check the car’s remaining range and send a route to the sat-nav from the comfort of your living room. The same app can also flash the car’s indicators and sound the horn to help you locate it in a crowded car park.

Safety is another area that Cupra has bolstered in its new Ateca. You now get predictive adaptive cruise control that, like before, can accelerate the car for you, but also slow down for curves in the motorway or when approaching junctions based on information from the car’s sat-nav. Exist Assist is also new and will apply the brakes if you try to exit a parking space into the path of another vehicle or cyclist.

The Cupra Ateca currently starts from around £37,000 and you can expect this new model to cost about the same when it goes on sale in the autumn. Get busy ticking options – for things like the optional 18-inch Brembo disc brakes and 20-inch alloy wheels, though – and you’ll easily end up with a list price of more than £40,000.

If you can’t wait for this new model to go on sale, read our in-depth Cupra Ateca review for the low-down on the current car or check out the latest Cupra Ateca deals to see how much you can save.